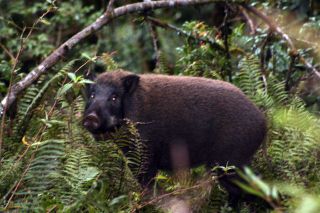 This wild boar is a real porker. Although they’re the wild ancestor of domesticated pigs, these guys, Sus scrofa, are much grumpier and can become aggressive if cornered.
(Image: © © David Emmett)

Feral pigs are becoming a wild problem in the United States.

The wild hogs can now be found in three-fourths of U.S. states — and their populations are growing in many areas — and are estimated to cause $1.5 billion in damages each year, the Associated Press reports.  There are currently more than 5 million wild hogs in the United States, according to the U.S. Department of Agriculture.

By all accounts, the animals are quite intelligent. They also sport razor-sharp tusks and can be aggressive toward people and pets. They have a remarkable knack for causing trouble, ranging from eating threatened species like dune lizards and spreading invasive weeds to carrying and transmitting more than 30 different kinds of diseases to humans, livestock and other wildlife, according to the AP. Feral pigs’ habit of digging and rooting around in the ground also tears up gardens and crop fields, and creates holes in roads that serve as hazards for cars and tractors.

But the state of New Mexico isn't letting the pigs get away with those antics. The state recently partnered with the U.S. Department of Agriculture on a $1 million project to hunt, trap and kill the animals. The plan is to hit the animals in a single coordinated effort, because the pigs are so smart that they can learn from failed efforts to trap them and avoid the snares in the future.

"They're much brighter than I am," Ray Powell, a veterinarian and New Mexico's land commissioner, told the AP. "If they had the dexterity, they'd be driving vehicles around. I mean these guys are really smart."

Hunters will also employ a "Judas pig." After finding and killing a hog family, officials will intentionally leave one pig alive — usually, an adult female. This "Judas pig" will then be outfitted with a tracking collar in order to lead state officials to a new set of pigs, which the surviving hog will seek out, the AP reports. [Image Gallery: The Most Destructive Invasive Species]

Texas may have the most wild hogs of any U.S. state, and the situation is expected to worsen, despite the $7 million per year that Texans spends to keep the animals' numbers down, the AP reports.  A recent study by Texas A&M University found that the number of feral pigs is likely to triple in five years in the state of Texas if serious efforts aren't made to reduce feral-pig populations, according to the Lubbock Avalanche-Journal.

"If a feral-hog sow produces a dozen piglets, 13 survive," goes an old joke, according to the Avalanche-Journal. But feral-pig reproduction is no laughing matter. The animals may start reproducing when they’re just 6 months old, and their litters average about six sows, reports Mississippi State University. They produce an average of 1.5 litters per year.

Feral pigs were introduced to North America in the 1500s by Spanish explorers and were used for hunting. In the wild, they can grow to be up to 300 pounds (136 kilograms) or more, according to U.S. government figures. Not one to shy away from controversy (or porcine genocide), the rock musician Ted Nugent killed 455 wild hogs in a recent hunting expedition in Texas. "I did it for Bill Maher and all those other animal-rights freaks out there," Nugent said, according to Mlive.com. He allegedly donated the meat to the homeless.