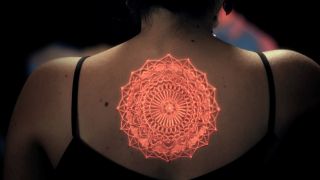 People have been inking decorative marks on their skin for thousands of years, as part of cultural traditions or as personal adornment. But a new spin on this old art form brought tattoos to life like never before: A combination of animation and a technique called projection mapping creates magical tapestries of light and movement that flow, slither and march over a person's body in real time.

In July 2015, Oskar & Gaspar, a collective of multimedia and visual artists based in Portugal, staged a landmark event in Lisbon, Portugal, called "Ink Mapping" that used projection mapping to transform tattoos into dynamic works of art.

Projection mapping combines traditional projection technology with software that conforms the projected media to fit within the boundaries of a three-dimensional surface — like a building façade — rather than a flat, rectangular screen. This allows artists to design motion sequences that follow a unique pathway of planes, curves and crevices, embracing the architecture and structure of the projection surface as part of the visual story. [Photos: Virtual Reality Puts Adults in a Child's World]

And while the combination of real-world objects and animation is usually created in movies and television long after the cameras stop rolling, projection mapping brings them together as you watch.

The group had already experimented with mapping projection onto bodies and faces, a representative told Live Science in an email. "And because we are big fans of tattoos, it seemed like the next logical step to bring these two types of art together," they said. "Two years ago, we started to experiment on our own tattoos, and it became crystal clear that the result would be fascinating."

The results were, in fact, astonishing, adding light play, depth and movement to a wide range of tattoo styles — creating spinning mandalas, flapping origami birds, supernovas, and even a winking, eyebrow-raising portrait of Salvador Dalí that recalled the "living pictures" seen in the "Harry Potter" movies.

However, the moving tattoos weren't born of magic but from the combined efforts of about 40 people working on model and setting preparation, image capture, lighting, content creation and projection. Each animation began with photographs of the tattoos, which were rendered as 3D models and incorporated into a motion sequence. Then, the human subject was positioned in front of a projector while video-mapping software was used to line up the animated media with the original tattoo and to get everything to fit within the projection area.

A demonstration that animated tattoos on both sides of a model's body took about 2 hours to produce, while other demos that focused on more isolated body regions needed about 45 minutes of preparation, the artists said. Then, the projector was activated, and shadows played across a gargoyle's face, and an origami bird flapped across an arm, leaving trails of ghost-birds behind it. In another instance, a tree grew, bloomed and shed its blossoms over someone's back.

Tattooing may be an ancient art, but the transformations at this event showed that they are still capable of generating plenty of wonder today.

You can see more Oskar & Gaspar projection-mapping projects on the group's Facebook page.