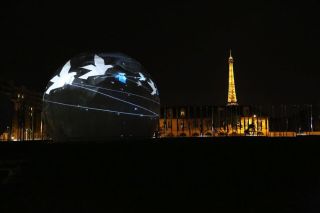 In light of Friday's terrorist attacks, UNESCO has also added a new series of projections to the planned photo display. The word peace is being projected onto the facade of UNESCO headquarters in six languages.
(Image: © © Isabelle Fournet/Mosaic of Change)

The United Nations Educational, Scientific and Cultural Organization (UNESCO) is celebrating its 70th anniversary this year with some very high-tech decorations.

Today (Nov. 16), a slew of superpowerful projectors will turn the many facades of the organization's headquarters in Paris into a giant digital photo album. The live projection show will literally reflect the accomplishments that the multinational agency has achieved over the past seven decades, displaying never-before-seen photos from the UNESCO archives. Over the weekend, several new images were added to the photo rotation in light of the terrorist attacks that took place in the French capital on Friday (Nov. 13). The word "peace" will appear on the side of UNESCO headquarters in six different languages.

The projection show will be repeated tomorrow and Wednesday night (Nov. 17 and 18). After Friday's attacks, UNESCO announced that Parisians and visitors to the City of Light will no longer be able to view the show up close from the Avenue de Lowendal. Instead, onlookers can watch the show live on the web via the Mosaic of Change website. [In Photos: World Heritage Sites Dazzle With Culture & Beauty]

In addition, an interactive "storytelling platform" will be unveiled inside UNESCO's headquarters today. The indoor exhibit is also image-based and focuses on the organization's past triumphs and ongoing activities around the globe. Dubbed "Mosaic of Change," the indoor exhibit and the outdoor projection show "utilize art and technology to educate and inform citizens," Eric Falt, a spokesman for UNESCO, said in a statement.

The tech behind these larger-than-life decorations comes from Obscura Digital, the same creative technology studio that projected enormous images of endangered species onto New York City's Empire State Building in August. The company has also projected images onto the Sydney Opera House, the Sheikh Zayed Grand Mosque in Abu Dhabi and the Guggenheim Museum in New York City.

Nearly 200 countries participate in UNESCO-sponsored activities and programs, which include international science programs, as well as the founding of natural World Heritage Sites, such as Great Himalayan National Park in India and Serengeti National Park in Tanzania. Cultural World Heritage Sites include the historic centers of cities around the globe, cultural meccas like the Great Wall of China, and prehistoric ruins and settlements all over the world.