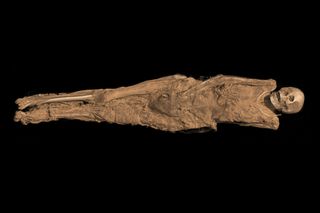 A tattoo was discovered on the thigh of a Sudanese woman who died 1,300 years ago. This CT scan 3D visualization shows her mummified remains.
(Image: © © Trustees of the British Museum.)

A Christian tattoo has been discovered high on the inner thigh of a mummified Sudanese woman. New images released by the British Museum show the ancient ink, which dates back to 1,300 years ago.

The well-preserved corpse was discovered during a recent archaeological excavation in northern Sudan along the banks of the Nile River. CT scans allowed researchers to peek under the woman's skin and look at her bones, while infrared imaging showed her faint thigh tattoo more clearly.

Researchers at the British Museum have interpreted the tattoo as a monogram for the archangel Michael, stacking the ancient Greek letters spelling Michael (M-I-X-A-H-A), The Telegraph reported. Archaeologists have previously found the symbol emblazoned on church mosaics and artifacts, but never before on human flesh. [Photos: An Ancient Mummy's Thigh Tattoo]

Curator Daniel Antoine told the paper that the ancient body art is the first evidence of a tattoo from this period, calling it a "very rare find."

Antoine doesn't know for sure what purpose the tattoo would have served, but speculated it might have been intended to protect the woman, The Telegraph reported.

The mummy is set to go on display at the British Museum in London in May as part of an exhibition called "Ancient Lives: New Discoveries."

The mummy is hardly the first, or even the oldest, to bear tattoos. It was common to get inked in many cultures around the world; mummies found in places like Peru, Egypt and the Philippines attest to a long and diverse history of body art.

At 5,300 years old, Ötzi the Iceman is Europe's oldest mummy and he may also hold the distinction of having the world's oldest surviving tattoos. The mummy was found frozen in the Alps in 1991 and he has several tattoos, mostly in the form of small lines and crosses, etched in soot around his joints. The markings are suspected to have been less decorative than therapeutic, since Ötzi is thought to have suffered from joint pain before he died.

Another notable frozen mummy discovered in the 1990s had tattoos, too. The 2,500-year-old body of a woman in her late 20s was found in 1993 in the permafrost of the Ukok Plateau in southwestern Siberia. She was tattooed with intricate animal motifs, abstract shapes and mythological creatures such as a deer with a griffon's head, according to The Siberian Times. Other mummies of the Siberian Pazyryk culture are inked with similar designs and animals like tigers, leopards and elk.