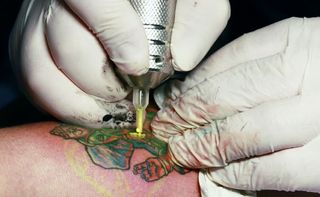 To reduce the risk of spreading blood-borne pathogens and bacteria, tattoo artists must always use sterilized equipment, new needles, disposable gloves and masks and should open unused containers of ink for every tattoo.
(Image: © Tatiana Morozova | Dreamstime)

Getting a tattoo carries major risks. In a recent University of British Columbia study, researchers determined that the risk of hepatitis C is directly linked with the number of tattoos a person gets, according to an analysis of 124 studies from 30 countries.

Infectious diseases, skin conditions and allergies are just a few of the concerns that must be addressed in order to provide the safest tattoo experience possible.

People with several tattoos and tattoos that cover large parts of their bodies are at a higher risk of contracting hepatitis C and other blood-borne pathogens, according to the University of British Columbia study released earlier this month and published in the current issue of the International Journal of Infectious Diseases.

Other major risks of tattooing include contracting HIV, hepatitis B and fungal or bacterial infections , according to the study. The known risks of tattoos are why the American Red Cross and most blood banks require people to wait 12 months after getting a tattoo before allowing them to donate blood.

Cases of Staphylococcus aureus are on the rise among people who get tattoos, according to the National Institutes of Health. This is particularly troubling because strains of these bacteria are highly resistant to penicillin and many antibiotics.

The chemicals in tattoo ink are another cause of concern, as some people may have allergic reactions such as dermatitis (severe skin irritation) to tattoo ink. The pigments used in tattoo dyes are industrial-grade and are suitable for printers' ink or automobile paint, according to the FDA's National Center for Toxicological Research.

The FDA has not approved any tattoo inks, including those used for the increasingly trendy ultraviolet (UV), glow-in-the-dark tattoos the risks of which are not yet known. Toxins in some tattoo inks may enter the kidneys, lungs or lymph nodes through the circulatory system, according to Michele Van Vranken, a physician at Teenage Medical Service in Minneapolis, Minn.

Van Vranken advises people with skin conditions such as eczema or who are prone to getting keloids (an overgrowth of scar tissue in the area of the wound) to reconsider getting a tattoo, as they may experience flare-ups or skin deformities as a result. Adverse reactions and allergies to tattoo inks may even surface several years after the procedure is performed, according to the FDA.

Think before you ink

To reduce the risk of spreading blood-borne pathogens and bacteria, tattoo artists must always use sterilized equipment, new needles, disposable gloves and masks and should open unused containers of ink for every tattoo none of this equipment can ever be re-used or shared.

But because tattoo parlors are regulated by state and local authorities, the cleanliness and safety standards of tattoo shops vary. It is up to customers to check out shops and pay them a visit or two before setting an appointment to get inked, experts say.

"Ask the tattoo artist some informal questions about their sterilization techniques and policies, and what their procedure is regarding the use of fresh needles and ink," said Michael Atkinson of the University of Toronto and author of "Tattooed: The Sociogenesis of a Body Art" (University of Toronto Press, 2003).

Atkinson warned against going by certificates of safety or health inspections posted on the walls of tattoo parlors, as these can easily be faked. Word of mouth plays an important role in a parlor's reputation, so getting recommendations from several people who can vouch for a shop's cleanness and quality is a good idea, as well as requesting references from any tattoo artist, he added.

Van Vranken recommends calling state, county or local health departments to find out about the laws in your community, as well as to ask for recommendations on licensed tattoo shops and to check for any complaints about a particular studio.

Just as important as selecting a pristine parlor is how well customers care for their newly minted artwork .

"For the first couple of days, the tattoo is an open wound that needs to be properly taken care of," Atkinson told Life's Little Mysteries. "Most shops hand out an after-care sheet with directions about how to clean and treat a new tattoo it's very important for people to carefully read that."

To further decrease their risk of infections and disease, people should take the same precautions with their new tattoo as they would with any other puncture, scrape or cut. They should apply an antibiotic ointment to the area, stay away from pools or hot tubs and avoid touching or picking at any scabs that form on the tattooed area, Van Vranken said.