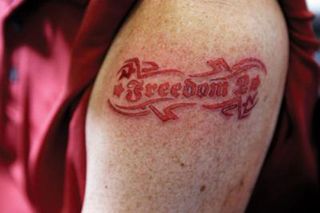 This is a before shot of the first permanent, removable tattoo created at Brown University. The new tattoo is designed to disappear with a single laser treatment.
(Image: © Freedom-2)

Love doesn't always last a lifetime, but it can tattoo the body forever.

For anyone who worries they might one day be jilted or might eventually want their cryptic body symbols removed, there's a new tattoo process that can be permanent or removed at the wearer's discretion.

The process, in which particles are suspended in a biodegradable polymer coating, is called microencapsulation. The resulting microcapsules—some as small as the point of a pin—can carry any molecule that needs protection or controlled release.

The technique, originally developed to make consumer products such as aspirin, is widely used to make scratch-and-sniff perfume ads: scratch the treated paper and microbeads burst to release the scent.

Now scientists at Brown University have made microencapsulated beads filled with dyes. These beads are mixed with a solution to make tattoo ink. Free of heavy metals and other toxins, the ink is safer than conventional products and is easily removed.

So when you want to wipe "Veronica" or "Jake" off your arm, a single laser treatment breaks the beads, allowing the body to naturally expel the dye trapped inside and bring a formal end to that old fling.

Currently, it takes about six or seven laser treatments to remove a tattoo using traditional inks.

“Microencapsulation is a real science,” said researcher Edith Mathiowitz, “and a real art.”