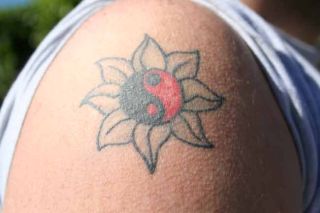 That tattoo you decided to get in college may look cool, but it might also be decreasing your skin’s sensitivity to touch.

University of Northern Colorado psychologist Todd Allen tested 21 undergraduates who had gotten tattoos within the last couple years, most commonly on their lower back for females and upper arm for males, and found tattooed areas were less sensitive than matching non-tattooed areas.

Allen tested sensitivity with an aesthesiometer—a sort of caliper with two plastic points. The points were gradually moved closer together on the skin until the person could only feel one point of pressure instead of two. Tattooed individuals felt this point sooner on their tattoo than on the same part of the corresponding non-tattooed body part.

Allen told LiveScience he sees three possible explanations for the change in sensitivity, all of which he said are difficult to test.

One possibility is that the tattoo ink disrupts the transmission of pressure from the surface of the skin to receptors deep in the skin.

Another is that the tattoo gun could over-activate the receptors so that they become less sensitive.

The third, and least likely possibility to Allen, is that “somehow the tattooing process has just damaged or killed the receptors in the skin.". This possibility is unlikely because these receptors generally grow back when damaged, he explained.

To test the third possibility, researchers would have to look at a tattooed cadaver and stain the nerve endings under the tattoo to see if they were damaged.

The decrease in sensitivity doesn’t hinder tattooed individuals, mostly because tattoos aren’t in places that require sensitivity. “It’s not a big deal in reality,” Allen said.

Allen would like to explore whether the number or size of tattoos further affects sensitivity.