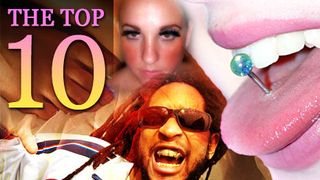 The things we do to our bodies. Reality TV might present extreme makeovers as harmless and routine, but many cosmetic procedures, despite their popularity, carry serious risks. Check out these 10 things people do to themselves that they shouldn't.

A lame weight-loss option, liposuction removes only about 10 pounds of fat after four hours of dangerous surgery. You'll have weeks of smelly ooze dripping from your wounds and months of swelling, as capillaries are destroyed and neighboring tissue dies from lack of fresh blood. At least the death rate is down to 1-in-5,000 procedures.

Want to impress your lover with a lumpy, flaccid penis? Then enhancement surgery is for you. The surgery carries such a risk of deformity and loss of sensitivity that no reputable surgeon will operate on a normal penis. The procedure is best for men who have lost function as a result of an accident or cancer.

The notion of injecting deadly bacteria in your face with hopes of paralyzing muscles might sound appealing, but oddly enough, Botox anti-wrinkle treatments carry some risk. Botox, short for botulinum toxin, one of the deadliest natural substances known, is used medicinally to treat muscle disorders. Treatments can cause respiratory failure and death; the FDA now is reviewing the risks and benefits.

Cheap treatments are the deadliest. Some topical whiteners contain mercury, which causes nerve and kidney damage; others contain hydroquinone, a carcinogen banned in Europe that ultimately blotches the skin. Some people lighten skin to hide a birthmark or smooth patchy discoloring from the pigmentation disorder vitiligo. In Asia and Latin America, skin whitening often is a pursuit of a Western ideal of beauty, with the sad reality that whiter skin brings more opportunity.

At best, bariatric surgery is a last option to lose weight. The surgery modifies the gastrointestinal tract by reducing stomach size or the ability to absorb food. Gastric bypass is the most common technique. Over 40 percent of surgeries result in major complications within six months, such as chronic diarrhea or hernia. Bodies weren't made to be obese, and they don't like our tampering with the mechanism to nourish them.

Wouldn't it be great if you could just tattoo your makeup so you wouldn't have to apply eyeliner and lipstick day after day. Sure, assuming the fashion world and your taste in makeup won't change in the next 50 years. The booming business of permanent makeup, using the same technique as tattooing, is generally safe but high on the "regret" level, as final color often doesn't meet expectation. Hey, it's only your face.

A grill is metal jewelry worn across the teeth, popular in the hip hop world, to give you that oh-so classless look, just one notch up from removing your teeth. Aside from the expense — thousands of dollars, yet more strain for cash-strapped urban youth pressured to keep up with various ostentatious displays of fashion — long-term use results in accelerated tooth and gum decay.

Piercing the soft tissue of the lower earlobe rarely causes a problem, aside from an allergic reaction to the metal earring or stud. Not so with all the other delicate places that folks pierce. Nipple piercings can take a year to heal, and the scarring interferes with breastfeeding. Genital piercings can break condoms, cause bleeding and increase the risk of spreading STDs. Tongue jewelry can chip teeth and is swallowed quite frequently. (It only hurts twice.)

Lasers can disable hair follicles, essentially knocking the hair-producing factors out of business. But treatment really only works best on fair-skinned people with dark hair; doesn't remove all the hair; takes months to complete; hurts; often causes scarring when done poorly; and might last for only a couple of years. And you need to stay out of the sun during the treatment. You might reconsider the razor. That technology has advanced to five blades.

If the shoe doesn't fit, saw off the toe. Women are having their toes shortened to look better in high-heel shoes. The surgery involves removing part of the toe bone. The long-term effect on walking is unknown but will likely result in arthritis many years later. On the bright side, if you can afford the Manolo Blahnik shoes and the $10,000 surgery in Beverly Hills, then you can likely afford someone to carry you around.