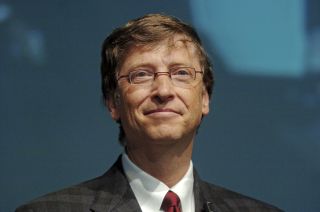 Bill Gates just released a climate science equation that explains how the world can lower carbon dioxide emissions "down to zero," according to the 2016 edition the annual letter he and his wife, Melinda, published. This letter went online on Monday (Feb. 22).

Problem is, the equation isn't exactly new. It's widely known in the climate science community as the Kaya identity, and was reviewed in the scientific literature in 2002 in the journal Proceedings of the National Academy of Sciences.

But instead of grilling Gates about the origins of the formula, climate scientists are glad he's talking about it, said Michael Mann, a distinguished professor of atmospheric science at Pennsylvania State University. [The Reality of Climate Change: 10 Myths Busted]

"My guess is that he had seen this somewhere in the past, and sort of forgot where it came from," Mann said. "And thought that maybe he had come up with it. I'll give him the benefit of the doubt."

The genesis of Gates' equation might remain a mystery for now — the Bill & Melinda Gates Foundation didn't return Live Science's requests for comment. But no matter where the equation came from, it can help scientists keep tabs on carbon dioxide emissions, Mann said.

The Kaya identity explains the factors involved in carbon dioxide output, but it's not a "magical formula," Mann said. "It's a way of breaking our carbon emissions into a number of factors, each of which we can try to focus on separately."

However, none of the factors is independent of the others, and so cannot be viewed in isolation, Mann said.

Here is a snippet from Gates' annual letter explaining the variables:

"On the right side you have the total amount of carbon dioxide (CO2) we put in the atmosphere. This is what we need to get to zero. It's based on the four factors on the left side of the equation: The world's population (P) multiplied by the services (S) used by each person; the energy (E) needed to provide each of those services; and, finally, the carbon dioxide (C) produced by that energy."

Both side of the equation need to reach zero, Gates said. So, one of the variables on the left must equal zero for the world to reach its goal of zero emissions.

The first variable is population. The world supports about 7 billion people now, a number that is projected to reach at least 9 billion by 2050. Population will only continue to grow, or as Gates says in the letter, "no chance it'll be zero."

Services, such as food, clothing, cars and heat, are also growing, "so (S) can't be zero, either," he said. However, the energy needed for each service is decreasing, thanks to progress in technology, such as the LED light bulb, Gates said. Moreover, growing technologies, including solar and wind power, are reducing carbon emissions, he said.

But the world is still far from reaching zero for either energy or carbon emissions, Gates said. "In short, we need an energy miracle" to get to zero carbon dioxide emissions, he said.

"He does an injustice to the very dramatic inroads that renewable energy and energy efficiency are making," Mann said, though he added that some of the developments are quite new.

For instance, scientists at Stanford University in California have peer-reviewed, published studies (the most respected type of study) that have "very credible outlines for how we could reach a 100 percent noncarbon energy generation by 2050," Mann said.

Different regions will need different strategies, but a mix of renewable energy — such as wind, solar and geothermal — can help lower energy emissions substantially, Mann said.

In the meantime, the public has made wry observations about Gates' apparent re-discovery.