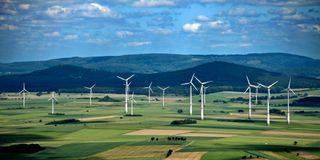 Global emissions of carbon dioxide — one of the leading causes of global warming — stalled in 2014, marking the first time in 40 years that there was no climb in CO2 emissions during a time of economic growth. The results suggest that efforts to reduce emissions may be on the upswing, but experts say the situation is not so simple.

In fact, some scientists say that the findings, announced last week by the International Energy Agency (IEA), represents only one data point and that the overall trend in carbon dioxide emissions is continuing upward.

Global CO2 emissions have stalled three times in the 40 years in which the IEA has been collecting data: in the early 1980s, in 1992 and in 2009. But each of those periods correlated with a downturn in the economy, whereas last year, the global economy expanded by 3 percent. This kind of separation between economic growth and CO2 emissions could be a hopeful sign, according to groups dedicated to combatting climate change. [8 Ways Global Warming Is Already Changing the World]

In the United States, energy-related CO2 emissions fell during seven of the past 23 years. Emissions in 2013 (and 2014) were higher than in 2012 but still 10 percent lower than they were in 2005, according to the U.S. Energy Information Administration. As such, global increases during this time period are typically attributed to the rapid industrialization of countries such as China and India.

China's CO2 emissions fell by 2 percent in 2014, as the country shifted more toward renewable energy sources, and the IEA is crediting last year's flat line to that crucial fall.

But scientists can't be so sure.

"There's so much going on in the climate system that you can't only look at one year, or even one decade," said Thomas Peterson, principal scientist at the National Oceanic and Atmospheric Administration's (NOAA) National Climatic Data Center. There are factors other than CO2 governing surface temperature and therefore global warming.

These include cloud cover, the amount of heat absorbed by the ocean, El Niño events and more, Peterson said. So despite the IEA's promising announcement, members of the climate community aren't resting easy.

And even though energy-related emissions remained constant last year, 2014 was still the hottest year on record, according to an annual report by NASA and NOAA scientists.

The reason for this is that CO2 lingers in the atmosphere for hundreds to thousands of years.

"If emissions remain constant, the concentrations [of greenhouse gases] will still increase in the atmosphere for a long time," said Don Wuebbles, a professor of atmospheric science at the University of Illinois at Urbana-Champaign. "The climate response that we're seeing in the atmosphere now is largely due to emissions that happened 20 years ago."

It would take about 100 years for the amount of carbon dioxide in the atmosphere to reduce to 37 percent of current levels, according to the Intergovernmental Panel on Climate Change (IPCC). This means that even if emissions are cut today, the atmospheric concentration of greenhouse gases would still increase for decades. It's like adding water to a bathtub: If you add more water than the drain is able to empty, the tub will eventually overflow. [Earth in the Balance: 7 Crucial Tipping Points]

"We need to take CO2 down below where emissions are today by quite a bit in order just to stabilize at a particular concentration,” Peterson told Live Science.

The latest report by the IPCC, the international organization tasked with assessing the science of climate change and its impacts, predicts that in order to keep the increase in average global surface temperature under 3.6 degrees Fahrenheit (2 degrees Celsius), total future CO2 emissions cannot exceed 1 trillion tons. After that, countries would have to curb all greenhouse gas emissions to avoid drastic consequences, such as severe weather and rising sea levels.

It's unclear how many billion tons of carbon have already been burned, but the IPCC argues that the planet cannot emit another 500 billion tons in order to stay below the recommended threshold. (Greenpeace has issued a more alarming forecast, saying that the figure is likely closer to 350 billion tons.)

Wuebbles, however, says the cap should be less than the number of tons of carbon emitted to date, whether that’s 500 billion tons or 650 billion tons.

"We're already seeing severe weather as a result of changes in climate and significant increases in precipitation coming as larger events, more droughts in some places, more floods in others, etc.," he said.

Yet he remains hopeful that the effects of climate change can be mitigated.

"I don't think it's too late,” Wuebbles said. "I think we should be acting now."