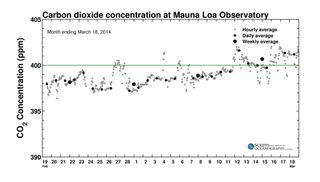 Levels of carbon dioxide in Earth's atmosphere have already surpassed a troublesome record set in May 2013, researchers said Wednesday (March 19). The week ending Tuesday, March 18, was the earliest to average more than 400 parts per million (ppm) of carbon dioxide, according to the Keeling Curve, one of the best climate records available. The 400-ppm milestone in 2013 was the first time carbon dioxide reached such a high level in human history.

The Keeling Curve is a continuous daily record of atmospheric carbon dioxide levels at Mauna Loa volcano in Hawaii, running since March 1958. That year, the greenhouse gas was at 313 parts per million. (Parts per million denotes the volume of a gas in the air; in this case, for every 1 million air molecules, 313 are carbon dioxide.)

While carbon dioxide levels have steadily climbed since 1958, every year there are seasonal variations. The yearly rise and fall reflects plant growth and death, which withdraws and releases carbon dioxide into the atmosphere. Carbon dioxide levels at Mauna Loa typically peak in May, but the high levels set in 2013 are appearing two months earlier this year. "We're already seeing values over 400. Probably we'll see values dwelling over 400 in April and May. It's just a matter of time before it stays over 400 forever," researcher Ralph Keeling said in a statement.

Read more: What is the Keeling Curve?