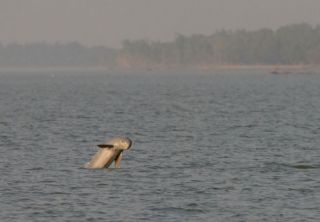 Although not considered an acrobatic animal, the Irrawaddy dolphin occasionally leaps into the air.
(Image: © Alice Rocco)

A huge population of rare dolphins threatened by climate change and fishing nets has been discovered in South Asia. Researchers with the Wildlife Conservation Society estimate that nearly 6,000 Irrawaddy dolphins, marine mammals that are related to orcas or killer whales, were found living in freshwater regions of Bangladesh’s Sundarbans mangrove forest and adjacent waters of the Bay of Bengal. There has been hardly any marine mammal research done in this area up to this point. Each discovery of Irrawaddy dolphins is important because scientists do not know how many remain on the planet. Prior to this study, the largest known populations of Irrawaddy dolphins numbered in the low hundreds or less. In 2008, they were listed as vulnerable in the IUCN Red List based on population declines in known dolphin populations. "This discovery gives us great hope that there is a future for Irrawaddy dolphins," said Brian D. Smith, lead author of a study describing the discovery. “Bangladesh clearly serves as an important sanctuary for Irrawaddy dolphins, and conservation in this region should be a top priority.” The study's findings were announced today at the First International Conference on Marine Mammal Protected Areas in Maui, Hawaii, and are detailed in the winter issue of the Journal of Cetacean Research and Management. Despite finding this extraordinarily large population, the study’s authors warn that the dolphins are becoming increasingly threatened by accidental entanglement in fishing nets. During the study, researchers encountered two dolphins that had become entangled and subsequently drowned in fishing nets — a common occurrence according to local fishermen. In another study, detailed in the March/April issue of the journal Aquatic Conservation: Marine and Freshwater Ecosystem, Smith and his coauthors report the additional long-term threat to the dolphin population of declining freshwater supplies, caused by upstream water diversion in India, coupled with sea-level rise due to climate change. These circumstances also threaten Ganges River dolphins, an endangered species with a range that overlaps with that of the Irrawaddy dolphins in the Sundarbans mangrove forest. Yangtze River dolphin, or baiji, are a type of freshwater dolphin thought to be extinct due to the impact of humans. The Irrawaddy dolphin grows to some 6.5 to 8 feet (2 to 2.5 meters) in length and frequents large rivers, estuaries, and freshwater lagoons in South and Southeast Asia. In Myanmar’s Ayeyarwady River, these dolphins are known for “cooperative fishing” with humans, where the animals voluntarily herd schools of fish toward fishing boats and awaiting nets. With the aid of dolphins, fishermen can increase the size of their catches up to threefold. The dolphins appear to benefit from this relationship by easily preying on the cornered fish and those that fall out of the net as the fishermen pull it from the water. In 2006, WCS helped establish a protected area along the Ayeyarwady River to conserve this critically endangered mammal population. The WCS is working on establishing a similar protected area network for both Irrawaddy and Ganges River dolphins in the Sundarbans mangrove forest. Funding for the new study was provided in part by the Kerzner Marine Foundation and Ocean Park Conservation Foundation, Hong Kong (OPCFHK), and the U.S. Marine Mammal Commission.