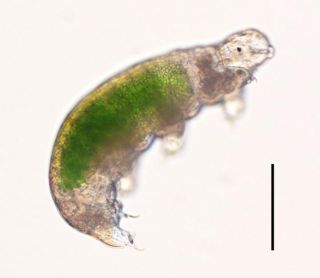 After being locked in a deep freeze for more than 30 years, two microscopic creatures called tardigrades have been resuscitated, with one of the adults getting busy with reproduction "immediately" and "repeatedly," scientists reported.

Scientists were even able to revive a tardigrade egg after it spent the past three decades cooling its jets alongside the mature duo in a researcher's freezer.

Their findings shattered the previous preservation and revival record for tardigrades and their eggs, which had been eight years for frozen tardigrades and nine years for dried eggs stored at room temperature. [Video: Watch the Frozen Tardigrades Come Back to Life]

But after more than 30 years in this suspended state, they were brought back to life.

Scientists rehydrated them and video-recorded the results, observing that after just one day, a revived tardigrade was tentatively stretching a pair of its stubby legs. Six days after rehydration, the tardigrade was moving its body, as though it were trying to lift itself, the researchers noted. After 13 days had passed, the animal was eating algae, its first meal in decades, And after 22 days, eggs were visible inside the tardigrade's chubby body.

It eventually laid 19 eggs. A. antarcticus reproduce through parthenogenesis, which means that their embryos grow and develop without fertilization, and in this instance, a total of 14 hatchlings emerged.

The other tardigrade survived for just 20 days after rehydration, and died without reproducing. But the frozen egg hatched and produced a larva that went on to lay 15 eggs, of which seven hatched successfully.

Tardigrades, which also go by the endearing names "water bears" and "moss piglets," measure about 0.02 inches (0.5 mm) long. They have eight limbs tipped with clawlike structures that propel their plump, segmented bodies through a variety of watery, algae-rich environments all over the world.

But they have a hidden superpower — surviving adverse conditions such as extreme heat or cold that would kill just about any other form of life. Tardigrades were even sent into low-Earth orbit in 2007, where they weathered exposure to space's vacuum, cosmic rays and solar ultraviolet radiation. Their secret lies in an ability to expel all the water in their cells and generate a protective coating, suspending them in a deathlike but still-living state that they can maintain until conditions improve.

Other tiny creatures are known for similar long-term preservation capabilities. The researchers described prior studies that revived refrigerated adult and larval nematodes, microscopic worms, after as long as 39 years.

But reviving a tardigrade after 30 years is unprecedented, and their ability to reproduce after a brief recovery period is a testament to their durability. It also raises questions about their preservation mechanisms, and how they and other organisms can survive a deep-freeze recover, and how they repair cellular and DNA damage when they're restored to life, Megumu Tsujimto, the lead researcher at National Institute of Polar Research, said in a statement.

The study was published online Feb. 16 in the journal Cryobiology,