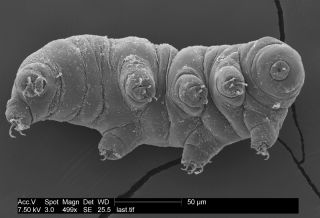 A tardigrade strikes a pose for the microscope.
(Image: © Byron Adams.)

Ask anyone to name an Antarctic land animal, and chances are the response will be, "penguin." Try again, says David Barnes, a scientist with the British Antarctic Survey.

"Penguins aren't really residents on land. All the species except for one — emperor penguins — spend most of their lives at sea," Barnes told OurAmazingPlanet.

"And likewise the other sea birds go north during Antarctica's winter," he added.

It turns out that the usual suspects — penguins, seals — don't actually live on the continent. They just visit.

"In order to see Antarctica's resident land animals, you have to have a microscope," Barnes said.

And one look reveals an outlandish cast of characters more suited to Lewis Carroll's fiction than a Disney movie, both in name and ability. The continent's natives — rotifers, tardigrades and springtails, collembola and mites — possess a bizarre array of physiological tools to survive on the coldest, windiest, highest and driest continent on Earth.

In addition, evidence is mounting that these weird Antarctic animals are remnants of a bygone age, the only survivors of a vanished world — something once thought nearly impossible.

"The take home message is that we think our animals survived the last ice age," said biologist Byron Adams, a professor at Brigham Young University.

The largest of the continent's land animals, the so-called "elephants of Antarctica," are the collembola, or, as they are more commonly known, springtails. Unlike the majority of their neighbors, they are visible to the naked eye.

"They look like insects — a little bit like an earwig," said Ian Hogg, a freshwater ecologist and associate professor at New Zealand's University of Waikato. "But they're a lot cuter than earwigs," Hogg added.

Typically under a millimeter long, the tiny, six-legged arthropods are similar to insects, but more primitive, and likely resemble the ancient ancestors of modern-day insects,  Hogg said. They live under rocks near coastal areas, and survive on a diet of fungus and bacteria. Hogg has found them as far south as 86 degrees latitude. [Strangest Places Where Life Is Found]

Although springtails are found all over the planet, those that live in Antarctica have a few tricks to survive the brutal conditions. They can slow down their metabolism to save energy, "and when it gets close to winter, they start to produce glycerol, which lowers their freezing point," Hogg said.

But even springtails can succumb in harsh Antarctic conditions. "If they get too cold they'll freeze solid, and that's the end of them," Hogg said.

Yet for Antarctica's most abundant land animal, tiny nematode worms, freezing is not fatal — it's more like a neat party trick.

The hardy worms are one of the most abundant creatures on Earth, and in Antarctica's simple ecosystems, they are king.

"They're the rulers of the continent," said BYU's Byron Adams. "As far as animals go, you're more likely to find a nematode than anything."

The worms may be tiny — a real whopper is almost as long as a dime is thick, Adams said — but they have the combined biological powers of a MacGyver and a Lazarus.

First, the worms employ inventive physiological processes to stave off the effects of the extreme cold.

Like springtails, Antarctica's nematodes can lower their freezing point. They also have a mechanism to protect their cells from the dangers of frozen water, allowing them to survive in temperatures well below freezing.

Inside a cell, ice can be deadly. "Imagine a drop of water," Adams said. "It's smooth and round. When that turns into ice, it turns into a ninja-star type of thing, with all these sharp points. That causes the cells to burst — it kills the cell," he said. This same process causes frostbite and its nasty effects. As cells die, tissue is destroyed.

To prevent this, nematodes produce proteins that act as packing peanuts, surrounding the sharp-edged ice crystals with tiny cushions to protect the cells from rupture and ensuing death.

When conditions get too dry (the worms require moisture to function), the worms have the ability to drop into a death-like state of suspended animation from which they can revive many months, even decades later, when conditions improve.

"They pump all the water out of the bodies until they're dried out like a little Cheerio," Adams said — a process similar to freeze-drying. The worms then literally just blow around in the wind until water returns — often, not until the following summer, when melt from glaciers creates freshwater streams around the continent.

"When the water comes back, the nematodes suck the water back into their bodies and they're re-animated — they come back to life," Adams said.

The strategy is not unique to Antarctica. Nematodes that live in hot, dry deserts do the same thing, he added. [Harshest Environments on Earth]

It's still not clear just how long the worms can survive in this state, but nematodes have reawakened after 60 years in freeze-dried mode.

For all their toughness, the nematodes may have reason to envy one of their Antarctic colleagues — tardigrades — which are similarly rugged, yet have one thing nematodes just haven't got: good looks.

Tardigrades look a bit like a bear crossed with a sweet potato. In fact, they look huggable — a rare quality among microscopic animals. They have chubby bodies and eight legs, from which curved, bear-like claws protrude.

Like nematodes, these algae-eating water beasts can "freeze-dry" themselves, and have even survived a trip into low-Earth orbit.

"It was quite surprising to me that exposure to the vacuum of space, with its extreme desiccating effect, did not affect survival at all," said Ingemar Jönsson, a professor at Sweden's Kristianstad University, in an email. Jönsson orchestrated the tardigrade space trip aboard a European Space Agency craft in 2007.

Where'd you come from?

The two remaining major Antarctic residents are mites — tiny arachnids that live alongside springtails under rocks — and rotifers, microscopic, slinky-like creatures that dwell alongside nematodes and tardigrades in more moist environments. Although there are many species of each, it's astonishing to essentially be able to count the land animals of an entire continent on one hand.

And although these extreme organisms use a range of biological stunts to survive in Antarctica, they can't live in the ice itself, and it was long accepted that the animals were fairly new arrivals.

"The dogma is that in the last glacial, the continent was totally covered with ice and there was no life," Adams said. "That would mean that all the organisms that live there had to have moved back there since the last glacial maximum — in the last 12 [thousand] to 20 thousand years." That's when retreating ice would have exposed bits of land fit for habitation.

"The problem with that is almost all the animals we find in Antarctica are indigenous to Antarctica," he said. "They're not found anywhere else in the world, and they're not closely related."

Genetic evidence suggests that the continent's residents must have stuck it out through the last glacial maximum. That, in essence, they've been there since 100,000 years ago, when the planet began to cool.

This, along with geological evidence, is changing some of the accepted thinking. Now many Antarctic scientists think the continent wasn't entirely icebound during the last glacial maximum. "We think that there were areas that were exposed, and that these animals survived in little pockets — and once the ice sheets receded, they expanded their range."

Essentially, the crushing cold and lack of moisture killed off the continent's more delicate beasts, and left behind only the hardiest. With almost no competitors for the limited resources, Antarctica's tiny animals were suddenly the smartest guys in the room, able to move out and take over the continent.

Even as researchers are learning more about the past of Antarctic wildlife, they are using the continent's residents to peer into the future.

"What is really fascinating about working in Antarctica, is that we can look at the effect of climate change on a single species in the soil," said Diana Wall, a soil ecologist at Colorado State University who has studied Antarctica's tiny animal life for more than two decades.

"We can't do that with a single species anywhere else — the communities are so complex," she said.

Hogg agreed. "Antarctica is such a simple system. The springtails are the biggest things you have to worry about," he said. "And the changes down there happen much more quickly than they will in more temperate latitudes, so it makes it a really fascinating place to look at these changes and how things might respond."

The continent serves as a pristine, natural laboratory, Adams said.

"If you take a sample from a beach in Florida, and you get an anomalous reading, it could be due to anything" he said. "Where we're working in Antarctica, we don't have any of those variables."

Ironically, because Antarctica has no native human population (along with the inevitable environmental footprints we leave behind), it's one of the best places on Earth to study how changing climate will affect the places people do live, Adams said. [Gallery: One-of-a-Kind Places on Earth]

"Someone might say, 'Well, springtails aren't very exciting animals,'" Hogg said. However, he added, studying them and their Antarctic neighbors, which all play a role in cycling nutrients through the environment, can help illuminate how ecosystems closer to home might change with the climate.

"It can help us learn about agricultural systems and the places that we care about and rely on for our daily well-being," he said

"It's very appealing to those of us who are trying to get to the bottom of the fundamentals of the relationship between biodiversity and climate change," Adams said. "This is the one place where we can do these experiments in a natural system."