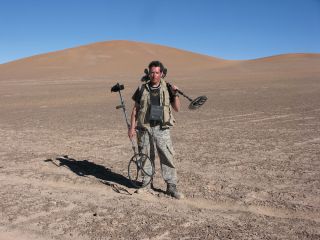 When news broke that a meteorite may have crash-landed in India last weekend, some experts thought it was odd that no one had seen a fiery space rock blaze across the sky.

That turned out to be the first of many clues suggesting that the unusual incident wasn't caused by a space rock, but likely by a land-based explosion — one that killed one person and injured three others, experts told Live Science.

"Initial assessments, based on photos posted online, are not consistent with something from space," NASA said in a statement emailed to Live Science. "Small meteorites do not start fires or cause explosions when they hit the ground." [See Photos of Meteorites Discovered Around the World]

The intense scrutiny paid to the Indian event isn't out of the ordinary. Typically, researchers rush to find meteorites the moment these extraterrestrial rocks hit Earth, said Geoff Notkin, president of Aerolite Meteorites, the world's largest meteorite company, and former host of the TV show "Meteorite Men," which aired from 2009 to 2012 on the Science Channel.

Notkin has chased Earth-bound meteorites for more than 20 years, and shared his tactics for tracking down the space rocks. But first, it's important to review the terminology: Small chunks of rock in space are called meteoroids. They're called meteors (shooting stars) when they fall through Earth's atmosphere, and they're known as meteorites if they touch down on land or in the water.

About 48.5 tons (44,000 kilograms) of meteoritic material falls on Earth daily, but it's usually the large, rare meteors and meteorites that make headlines (and craters), according to NASA.

Fireball in the sky

Large meteors often look like fireballs as they blast across the sky, much like the 2013 Chelyabinsk meteor explosion that rained meteorites across parts of Russia and Kazakhstan, Notkin said. Researchers can use Doppler radar — the same technology that meteorologists use to predict the weather — to follow the meteor and its debris as it breaks apart during its flight.

"If we can get Doppler data on the falling patterns, it can really narrow the search area," Notkin said.

Other than that, researchers rely on eyewitness accounts and video footage (if there is any) to track the meteor. Sometimes, meteorites tumble onto private land, and Notkin will ask landowners if he can look on their property. (If the meteorite is later sold after being studied, Notkin and the landowner will agree on how to split the profits, he said.) In the United States, a meteorite that falls on a landowner's property belongs to the landowner, but if a space rock falls on public land, it belongs to the Smithsonian Institution, Notkin said.

Once researchers find the landing site, they examine objects in the area. Chances are, it's a meteorite if it has "a thin, black rind" on its surface — one that formed when the rock was "superheated" as it raced through Earth's atmosphere, he said.

"When they make it to Earth, they look very much like charcoal briquettes," Notkin said.

Moreover, meteorites are rich in iron, so they stick to magnets, he said. But the longer a meteorite sits on Earth, the more it's exposed to oxygen, water, fertilizers and other contaminating elements.

"There's a real urgency to recover them and get them to the lab as quickly as possible," Notkin said. "These are recently arrived visitors from outer space that have a lot of potential valuable information that they can tell us about their origin." [Crash! 10 Biggest Impact Craters on Earth]

Once a meteorite is in the lab, researchers can analyze its components. For instance, the mineral schreibersite, which contains nickel, iron and phosphorous, is found only in iron meteorites, Notkin said. Another clue is the Widmanstätten pattern, a geometric structure unique to iron meteorites, he said. Some meteorites are packed with gemstones, which form on asteroids that once had a molten core and formed crystals out of the magma.

Recovered meteorites can also yield fascinating geologic discoveries. In 2011, researchers found a new type of mineral on a 4.5-billion-year-old meteorite.

After investigating countless meteorites, Notkin said he was skeptical when he heard about the Indian episode.

"When there's an unexplained event — when there's an explosion or a strange rock appears — it's very common for people who don't have expertise in meteorite science to say, 'Oh, that must be a meteorite. It must be something that fell out of the sky,'" Notkin said.

NASA seemed to echo that skepticism.

"To form a crater the size of what has been posted online would have required a meteorite of at least several kilograms," NASA said in the statement. "While more details may be forthcoming from local scientists, this is unlikely something from space."