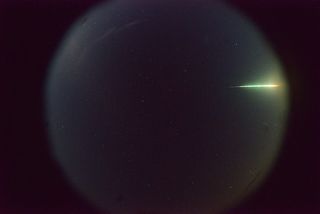 When a greenish fireball streaked above the Australian Outback in November, meteorite researchers went hunting for the space rock that caused this cosmic display.

This week, they announced success after pulling a meteorite out of the salty mud near a remote lake bed in the desert.

The 3.5-lb. (1.6 kilograms) rock likely formed during the birth of the solar system, more than 4.5 billion years ago, the researchers say. [Fallen Stars: A Gallery of Famous Meteorites]

"It was an amazing team effort — we got there by the skin of our teeth," Phil Bland, a planetary geologist at Curtin University in Perth, Western Australia, said in a statement.

The space rock streaked across the sky on Nov. 27, 2015. It was spotted not only by locals but also by five of the 32 remote skygazing cameras Bland and his colleagues have installed across the Australian Outback as part of the new Desert Fireball Network.

Using the data they captured, the researchers attempted to pinpoint the location where the meteorite likely fell. Next, during a flyover of the region, they captured a small but promising craterlike impact in the dried-up, lower-than-sea-level Kati Thanda-Lake Eyre, in the state of South Australia.

After Christmas, the team spent three days conducting a ground survey, trying to beat the impending rainfall that would wash away traces of an impact crater. When they finally found the small impact dent in the lake bed, Bland used his hands to dig into the mud and pulled out a meteorite. It is the first one the team has located using the Desert Fireball Network.

"It demonstrates beyond doubt that this giant machine that we've built really works," Bland said in the statement. "We've got a lot more rocks on the ground. This recovery will be the first of many — and every one of those meteorites will give us a unique window into the formation of the solar system."

When a fireball is caught on camera as it descends to Earth, scientists can conduct what amounts to a cosmic paternity test on the space rock; its orbit can be calculated and its asteroid origins can be determined.

More geochemical testing is needed to study the newfound meteorite. For now, Bland and his colleagues say it is most likely a chondrite meteorite, the most common and most primitive type of meteorite found in the solar system. It was originally about 175 lbs. (80 kg) before it burned up in Earth's atmosphere. It stopped burning about 11 miles (18 kilometers) above the surface of the planet and fell steeply to the ground, the researchers said.

Perhaps to quell the burning questions of Internet commenters, the team provided more details about the discovery on their blog today (Jan. 8). They say that the rock "smells a bit like salty mud!" and they explain why no one is wearing gloves in their video footage of the discovery. "This rock is as Earth-contaminated as you can get, having rested for more than a month in thick mud. Handling? Not an issue," one of the researchers said.