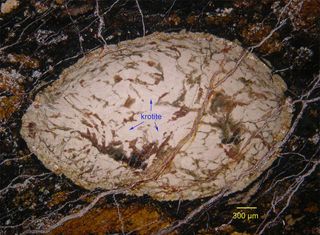 Krotite mineral is shown as the darker veins running through the egg-shaped grain (called "cracked egg") in the ancient meteorite.
(Image: © Chi Ma.)

A 4.5-billion-year-old meteorite from northwest Africa has yielded one of the earliest minerals of the solar system.

Officially called krotite, the mineral had never been found in nature before, though it is a man-made constituent of some high-temperature concrete, according to study researcher Anthony Kampf, curator of Mineral Sciences at the Natural History Museum of Los Angeles County (NHM). [Image of new mineral]

"This is one that simply was not known in nature until we found it here," Kampf told LiveScience. "That's pretty dramatic."

The meteorite containing krotite is called NWA 1934 CV3 carbonaceous chondrite. Chondrites are primitive meteorites that scientists think were remnants shed from the original building blocks of planets. Most meteorites found on Earth fit into this group.

The mineral, a compound of calcium, aluminum and oxygen, needs temperatures of 2,732 degrees F (1,500 degrees C) to form, supporting the idea that it was created as the solar nebula condensed and the planets, including Earth, were formed, the researchers say.

The tiny mineral sample – just 0.2 inches (4 millimeters) long – came from a grain in the meteorite dubbed "cracked egg" for its appearance. In addition to krotite, the cracked egg grain contains at least eight other minerals, one of which is new to science, the researchers say.

Studying this mineral and other components of the ancient meteorite are essential for understanding the origins of the solar system, the scientists say.

When meteors hit the ground they are called meteorites. Most are fragments of asteroids (space rocks that travel through the solar system), and others are mere cosmic dust shed by comets. Rare meteorites are impact debris from the surfaces of the moon and Mars.

"This meteorite likely came from an asteroid in the asteroid belt," leader researcher Chi Ma of Caltech told LiveScience.

Another ancient meteorite, this one discovered in Antarctica, also recently yielded a new mineral called Wassonite.

The fact that krotite forms at such high temperatures and low pressure make it likely it is one of the first minerals formed in the solar system.

The mineral is named after Alexander N. Krot, a cosmochemist at the University of Hawaii, in recognition of his significant contributions to the understanding of early solar-system processes.

The finding is detailed in the May-June issue of the journal American Mineralogist.