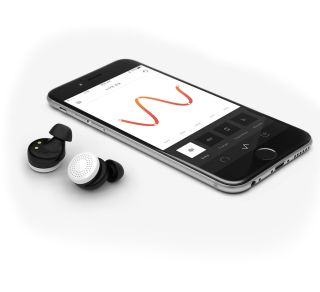 The Here Active Listening system consists of a pair of earbuds that use Bluetooth to wirelessly connect to a smartphone app.
(Image: © Doppler Labs)

Imagine if you could make a garage band sound as if it were playing in a concert hall, or if could turn down the volume of a screaming baby on an airplane.

New earbuds from the Here Active Listening can now instantly transform sounds from your surroundings. These wearable devices seek to "augment reality" — in this case, your soundscape.

In the future, these devices could enable translation of live speech, much like the "universal translators" in "Star Trek," said researchers at Doppler Labs, where the Here system was invented. [10 Technologies That Will Transform Your Life]

"We believe in a future where supercomputers can fit in the ears," Noah Kraft, co-founder and CEO of Doppler Labs, told Live Science.

"We think the future is in wearable technologies, in our case, hearables," Kraft said. "We want people to be more engaged in their environments, to personalize their sonic experiences."

The Here system consists of a pair of earbuds that use Bluetooth to wirelessly connect to a smartphone app. A microphone on each Here earbud captures incoming sound waves. Electronics in each bud can modify these sounds, and then miniature speakers play the result, all in less than 30 millionths of a second, leading to no perceivable delay, according to Doppler Labs. Users can use the smartphone app to adjust Here's settings.

The earbuds can boost or reduce the volume, bass, treble, reverb and other aspects of live sounds in a person's environment. For example, you could dampen noise from chatter in a crowded room or crank up the bass of music playing at a club.

Grammy Award-winning film composer Hans Zimmer said he is a fan of Here. "You can turn off your nagging mother or the dog barking," Zimmer said in a promotional video. "It's about having control of your life beyond the ear that you were born with."

To nullify sound, the earbuds possess not only complex internal air spaces, but also active noise-cancelling technology, which generates sounds to counteract incoming noises. "We can remove the screeches that subways make," Kraft said.

Here can operate for 4 to 6 hours with the help of a rechargeable lithium-ion battery and low-power electronics that optimize battery power. Moreover, the case that holds the earbuds houses two extra charges as well, Doppler Labs said.

Through Kickstarter, Here raised more than $635,000 from more than 2,800 backers. Doppler Labs then raised $17 million from venture capitalists to help bring Here to market. The makers have created a limited run of 10,000 Here units. The waitlist for these devices currently exceeds 25,000 people, but Doppler Labs said it will make Here available to buy at the Coachella Valley Music and Arts Festival in Indio, California, in April. The feedback from users on these units will help Doppler Labs tweak Here for the mass market, and "we hope to be consumer-ready by the end of the year," Kraft said.

Doppler Labs emphasized that Here is not meant for phone calls, nor does it play music that's been wirelessly transmitted by smartphones. Here is not a hearing aid, either, nor is it meant to replace the kind of hearing-protection systems used at firing ranges.

However, Kraft noted that Here could one day find use in real-time translation. "Who doesn't want to work on a 'moon shot' idea like that?" he said. "We're only at the beginning of the journey right now to help give people full control of their world."