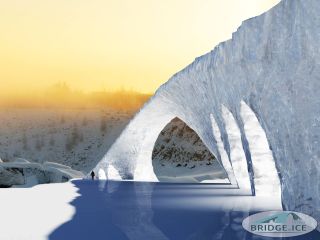 A 3D rendering of the Bridge in Ice in Finland.
(Image: © Eindhoven University of Technology)

One of Leonardo da Vinci's most stunning engineering plans is getting a decidedly chilly welcome to the modern world.

Students in the frigid hinterlands of Finland plan to recreate one of the Renaissance man's many iconic sketches: a massive stone bridge spanning the Bosphorus River. But instead of relying on stone, the students plan to use a more local, sustainable material: ice. [5 Da Vinci Designs That Were Ahead of Their Time]

Leonardo da Vinci, who lived between 1452 and 1519, is perhaps most famous for painting the "Mona Lisa." But the polymath also made impressive contributions to the fields of astronomy, engineering and anatomy. In 1502, da Vinci sketched the plans for a massive stone bridge, about 790 feet (240 meters) long, that would span the strait of Bosphorus, which separates Asia from Europe. The entire bridge is subject only to compressive loads, meaning all of the elements in the bridge get shorter with applied force, according to a statement from Eindhoven University of Technology. (Most real bridges experience both compressive loads and tensile, or lengthening, forces.) Despite its graceful lines and audacious design, the bridge was never built.

Now, a group of researchers and students at the Eindhoven University of Technology in the Netherlands have begun to bring da Vinci's sketches into the modern era, with an aptly named project called "Bridge in Ice." The team began construction of the ice bridge on Dec. 28, 2015, in Juuka, Finland.

When it's completed in mid-February, the bridge will span 115 feet (35 m) and should be strong enough to allow pedestrians to jaunt along its icy expanse. The team also plans to test the bridge's strength by driving a car over it, Artnet reported.

To accomplish their stunning feat, the team will spray thin jets of a mixture of paper fiber and water into massive balloonlike molds. When the paper-reinforced ice freezes (nearly instantly), it will be three times as strong, and 10 times as tough, as ordinary frozen water, according to the statement.

"Designing the balloon is not as easy as filling a bag with air," Maarten Arntz, a student at the Eindhoven University of Technology, said in a video about the project. Given the balloon dimensions, "wind and snow have a very large influence," Arntz said. "So we made a 3D computer model to predict the forces on the balloon construction. Now, we are busy with building a stability part inside the balloon to stabilize the middle part of the balloon."

The project is Herculean in its scope. The completed bridge will require 900 tons of ice, and 150 student engineers from all over Europe will help with construction. Juuka's frigid temperature of minus 4 degrees Fahrenheit (minus 20 degrees Celsius) when they started construction,is considered the perfect temperature for construction, one team member in the video said. The team can never stop working, or the equipment will freeze, according to the statement. To accomplish the task, teams will work in shifts around the clock until the construction is complete.

Last year, the same group built an icy recreation of the Sagrada Familia, Gaudi's iconic church in Spain, and in 2014, the team built the world's largest ice dome.