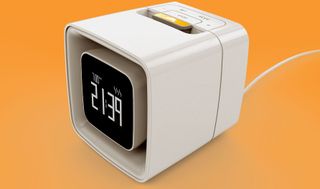 This "olfactory alarm clock" called SensorWake uses scents — like espresso, chocolate — to wake you up, according to the company.
(Image: © SensorWake)

LAS VEGAS — You might not think that your sense of smell could have anything to do with how much sleep you get, but several new devices aim to harness certain scents to both help you sleep and wake you up.

Although it remains to be seen just how effective the devices really are — they have not been tested by independent scientists — some studies do support the idea that scents can modify sleep.

One up-and-coming product, called Sleepion, from the Japanese gadget company Cheero, uses a combination of aromas, lights and sounds to promote sleep, according to the company. The device was presented here last night at CES Unveiled, a showcase of new tech products at the annual trade show for consumer electronics.

Sleepion uses aromatherapy oils to create scents, including lavender, cedar and geranium. A 2005 aromatherapy study of 31 young adults found that lavender oil increased the percentage of sleep time that people spent in deep sleep. So far, Sleepion is just a prototype, and the company is raising funds on Kickstarter with the hope of shipping the product in March 2016. [The Best Sleep Apps]

Another product that was promoted here, called SensorWake, aims to end the days of bleeping alarms that jolt you awake. The device instead uses scents — like espresso, chocolate and peppermint — to take you out of your slumber. The scents come in capsules, and a single capsule can be used for about a month.

The device might not work for you if you have a cold — the company says it tested the device on 100 people, and of these, three people didn't wake up because they had a stuffy nose. But if you don't wake up to the scents after 3 minutes, the device has a backup: a sound alarm to wake you up, the company says. SensorWake is available for preorder, with shipping starting in June.