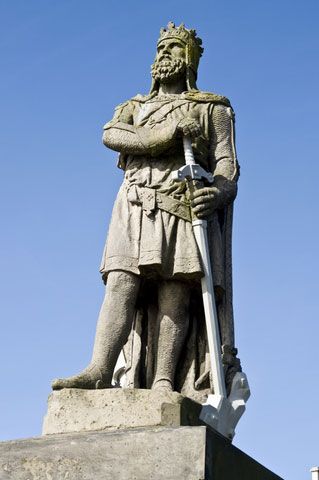 A statue of Robert the Bruce at Stirling Castle, Scotland.
(Image: © dreamstime)

The remains of the palace of King Robert the Bruce, widely considered one of Scotland’s greatest kings and warriors, could be among the artifacts and material dug up recently at a building site in Scotland, according to a British newspaper report.

Born to Scottish nobles in 1274, Robert the Bruce reigned as King of the Scots from 1306 until his death in 1329. He led Scotland in the Wars of Scottish Independence against England, which resulted in Scotland retaining its sovereignty and in which the Scottish hero William Wallace (subject of the 1995 film "Braveheart") also fought.

Bruce's descendents founded the Stewart dynasty and include all later Scottish monarchs.

The stone foundations to a building believed to be Bruce's palace were uncovered when a building company began digging in a field for a housing project, The Guardian newspaper reported on Sunday.

The foundation and various artifacts, found in an area to the west of Glasgow called the Pillanflatt, which means "pavilion of the great hero," match descriptions in ancient documents about the location of the king's home, according to historians.

"The 1362 charter states that Robert the Bruce resided between Kings Park of Cardross and the lands of Pillanflatt, bounding the lands of Dalquhurn," historian Stuart Smith, who has studied the Bruce family for 35 years, told the newspaper.

Sections of masonry, plasterwork and mortar have been sent to the Scottish Lime Centre, where tests confirmed that the stone dates from the 14th century and is of a type used in the construction of a cathedral or chapel.

The area of the palace is thought to include the king's manor house, which had a 100-foot grand hall, a queen's quarter and a chapel.

"We knew that Pillanflatt was where the king lived," Duncan Thomson, chairman of the Strathleven Artizans, a group set up to promote the area's links with Robert the Bruce, told the paper. "Before we found the foundations, we had to guess where the king's house was."

Once the authenticity of the site is confirmed, the group behind the discovery plans to petition Historic Scotland to designate the area as a site of special historic interest. If this happens, the site would join a list of famous Scottish monuments that includes Edinburgh Palace (a statue of Robert the Bruce sits at the entrance) and Holyrood Palace, the official residence of Scottish monarchs since the 15th century and now the Scottish residence of Queen Elizabeth II.