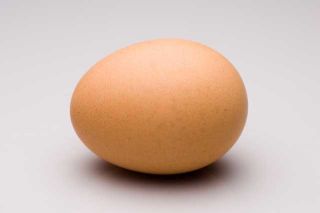 Distant ancestors of all mammals laid eggs. New research has cracked a longstanding mystery by linking the human placenta to the lining in eggs.
(Image: © Dreamstime.com)

When it comes to public consumption of nutrition studies, an old adage applies: Everything in moderation.

The latest study looking at what you should eat involves eggs. Despite decades of advice that the cholesterol in eggs is bad for you, researchers in Canada now report evidence that eggs might reduce another heart disease risk factor — high blood pressure.

The scientists found egg proteins that, in laboratory simulations of the human digestive process, seem to act like a popular group of prescription medications in lowering blood pressure. The findings are detailed in the Feb. 11 issue of the American Chemical Society's Journal of Agricultural and Food Chemistry.

Important caveats: Funding for the research came from livestock and poultry industry groups. And the researchers emphasize that further study is needed to determine if the proteins actually works in humans. Meanwhile, federal guidelines for limiting egg consumption have not changed because of the study.

Researchers Jianping Wu and Kaustav Majumder note that eggs are an inexpensive source of high-quality protein and other nutrients. Eggs by nature are a complete source of nutrition for a new life, Wu points out. Yet egg consumption has decreased in the past 40 years amid concerns about cholesterol.

Recent studies have suggested that healthy people can eat eggs in moderation without increasing their heart disease risk, Wu and Majumder write. In addition, studies have hinted that certain egg proteins might have effects similar to ACE inhibitors, prescription drugs used to treat high blood pressure.

Wu and Majumder identified several different peptides in boiled and fried eggs that act as potent ACE inhibitors. Enzymes in the stomach and small intestine produce these peptides from eggs. Fried eggs had the highest ACE inhibitory activity, they report.

But they did not do the study directly on humans.

"We prepared cooked egg samples and digested the cooked egg samples under simulated conditions of human gut in vitro using pepsin (a stomach enzyme) and pancreatin (a mixture of enzymes found in the small intestine) and then we determined potent ACE inhibitory activity and identified several bioactive peptides derived from egg proteins," Wu explained.

"Our study showed further evidence that a number of bioactive peptides may be generated while digesting egg proteins, which would provide additional benefits for reducing another well-identified risk of heart disease," Wu said by email. "Egg has been part of human diets for centuries and therefore it is safe to consume eggs."

But do so in moderation, other experts would say.

The U.S. Department of Health and Human Services, in its nutrition guidelines issued in 2005 states: "Since eggs are high in cholesterol, limit egg yolk intake to no more than 4 per week because of the saturated fat and cholesterol content."

According to the American Heart Association, one egg contains about 213 milligrams of dietary cholesterol, while the daily recommended cholesterol limit is less than 300 milligrams for people with normal LDL (bad) cholesterol levels.

"An egg can fit within heart-healthy guidelines for those people only if cholesterol from other sources — such as meats, poultry and dairy products — is limited," the association advises.