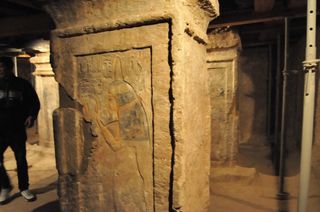 Maia, whose tomb was discovered in 1996, is thought to be King Tutankhamun's wet nurse, but a new analysis of the space suggests she may also be his half sister, archaeologists said.
(Image: © Copyright Egyptian Ministry of Antiquities)

Egypt's famous "boy king," the pharaoh Tutankhamun, may have suckled at the breast of his half sister during his infancy, new research finds.

The announcement comes on the heels of a cleaning and analysis of the tomb of Maia (or Maya), King Tut's wet nurse. Researchers discovered the tomb in 1996 in Saqqara, an ancient burial ground about 19 miles (30 kilometers) south of Cairo, according to a statement posted yesterday (Dec. 20) on the Egyptian Ministry of Antiquities' Facebook page.

In preparation for the public opening of Maia's tomb next month, the ministry organized a cleaning of the space. During this preparation, workers found a potsherd with the title "Great one of the Harim," inscribed on it, Antiquities Minister Mamdouh Eldamaty said in the statement. [In Photos: The Life and Death of King Tut]

This inscription suggests that "Maia wasn't just the private wet nurse of the king," Tutankhamun, but that she held a much higher position, Eldamaty said. Perhaps Maia was actually Meritaten (also spelled Merit Aten), King Tut's half sister, he said.

A burial scene painted on the royal tomb at Tal Al-Amarna (also spelled Tell el-Amarna), an ancient city built by King Tut's father, Akhenaten, shows a portrait of the family. One scene shows the burial of Meketaten, one of King Akhenaten's daughters. Within that scene, Meritaten is shown breast-feeding a baby, who is thought to be Tut, according to the statement.

"Maia is none other than princess Meritaten, the sister or half sister of Tutankhamun and the daughter of Akhenaten and Nefertiti," Alain Zivie, the discoverer of Maia's tomb and director of the French archaeological mission of Bubastis at Saqqara, told the Agence France-Presse (AFP).

Maia's tomb holds more clues about her identity, Zivie said. For instance, there are carvings of Tut and Maia within her tomb, he said.

"The carvings show Maia sitting on the royal throne, and he is sitting on her [lap]," Zivie told the AFP. "The extraordinary thing is that they are very similar. They have the same chin, the eyes, the family traits."

The new finding will help researchers piece together the life story of King Tut, who assumed the throne at about age 10 and ruled Egypt from 1332 B.C. to 1323 B.C. Earlier genetic tests identified Akhenaten as King Tut's father, but the name of his mother remains elusive.

This isn't King Tut's first appearance in the media in recent weeks. The king's funerary mask went back on display at Cairo's Egyptian Museum last week after its beard was reattached with beeswax, and archaeologists are now investigating whether previously overlooked rooms next to Tut's burial chamber contain other tombs, possibly that of Queen Nefertiti, who is thought to be King Tut's stepmother.