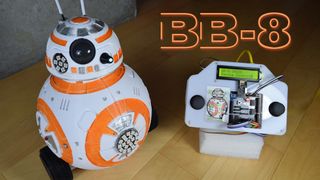 The 3D printed droid is about half the size of its silver screen counterpart and is controlled with a remote.
(Image: © J.R. Bedárd)

A software engineer in Canada recently created a 3D-printed replica of the adorable BB-8 robot from the new "Star Wars" movie. The force is strong with this one.

J.R. Bedárd was inspired to build his own version of the roly-poly robot after the real BB-8 droid (the one used in the film "Star Wars: The Force Awakens") took to the stage at Star Wars Celebration, a fan convention held in April in Anaheim, California. Fans like Bedárd were amazed that the bot — which has a half dome for a head and a spherical body that rolls over the ground — actually appeared in the film and that the robot was not the product of computer-generated imagery (CGI).

Once he saw that such an unusual-looking bot could be built, Bedárd said he couldn't resist making a (slightly modified) one for himself. ['Star Wars' Tech: 8 Sci-Fi Inventions and Their Real-Life Counterparts]

"I've completed a couple of 3D-printing projects before and wanted to create my own [remote-controlled] version of this droid, on wheels," Bedárd told Live Science in an email. "Being on wheels meant that I could add more 3D details and elements on the shell of the robot, as it doesn't need to be flat for rolling."

The BB-8 bot that inspired Bedárd is reminiscent of R2-D2, the oh-so-cute "astromech droid" with the beeping binary vocabulary that accompanies protagonists like Padmé Amidala, Luke Skywalker, Obie-Wan Kenobi and Princess Leia throughout the "Star Wars" universe. (Don't worry: R2 also appears in the new film.) But unlike R2-D2, this new droid doesn't roll around on wheels in the film; it has a ball-shaped body that spins around, and up top it has a half sphere for a head. Attached to the body by magnets, the head wobbles adorably as the bot rolls over the ground. (See a GIF of the bot in action.)

Recreating the round bot took a "3D printer and lots of patience," according to Bedárd, who said he spent about 50 hours building his BB-8 droid. The replica Bedárd created is only half the size of the real BB-8, but he used 656 feet (200 meters) of white plastic filament to 3D-printthe eight parts that make up this smaller version.

After printing BB-8's body and head, Bedárd brought the bot to life using self-balancing wheels and an Arduino microcontroller (a component that allows the bot to be controlled remotely). At some point, Bedárd said he'd like to make a BB-8 droid that rolls without wheels and has a magnetic, wobbly head like the film version of the robot. But for now, he has settled for adding other cool features to his creation — such as a slew of light-emitting diodes, or LEDs, that can be programmed to project different colors and visual effects.

To finish the bot, Bedárd gave it a fancy paint job using an assortment of orange and metallic nail polishes. That might sound like an odd design choice, but the engineer said the fingernail paint is "cheap and renders that thick, reflective look that acrylic [paints] can't." He also used an unconventional (but seasonally appropriate) material to build the droid's "eye" — the black, bulbous component on its head that lets the bot "see" the world. The mini BB-8's eye is made from half of a Christmas tree ornament, Bedárd said.

Right now, the industrious software engineer is "cleaning up" the BB-8 computer model so that he can share it online. Soon, he said, other "Star Wars" fans will be able to 3D-print the adorable droid at home.

Editor's Note: The instructions for how to build this 3D-printed BB-8 are not yet available online, but if this is the robot you're looking for, the popular Sphero BB-8 App-Enabled Remote Control Droid is available in the Live Science store.