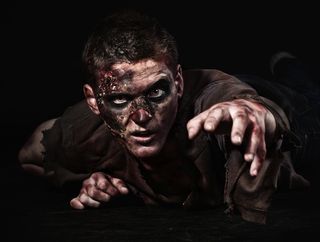 "Zombie infections: epidemiology, treatment, and prevention" — readers of the BMJ medical journal might have done a double take at that title of an article released Monday (Dec. 14).

Don't panic. The walking dead aren't really out to get you. But stories about zombies are a good analogue for the spread of real-life infectious diseases, said article author Tara Smith, who researches emerging diseases at Kent State University in Ohio.

In horror movies, "the way most zombie outbreaks happen is through an infection," Smith told Live Science. "Somebody gets a virus or a bacterium or a fungus, and it causes them to zombify," she said.

That's why Smith wrote the tongue-in-cheek piece for the BMJ's traditionally goofy Christmas issue. She's used the same zombie analogy when giving lectures, whether academic or popular, or in venues ranging from local libraries to comic conventions. She's even on the board of the Zombie Research Society. (Yes, it's real.)

"We spread zombie science around the country," Smith said. [Our 10 Favorite Monsters]

In the new article, Smith lays out a history of zombies and zombie pathogens, from the Solanum virus in the book and film "World War Z," to the modified Ebola virus that swept the United Kingdom in the movie "28 Days Later." Needless to say, these viruses are fictional (though there are some real — and very dull —viruses that infect potato plants that bear the Solanum name).

Zombie writers and filmmakers tend to draw on the model of disease when inventing their zombifying pathogens. One of the more realistic stories, Smith said, is "The Last of Us," a video game that depicts zombification caused by a fungus. There are actually real-life fungi that can cause zombification, but they affect only insects. For example, Ophiocordyceps fungi infect ants, hijack their nervous systems and force the brain-dead insects to march up to the tops of grasses or branches before killing them. The bodies of the ants then become a nursery for more fungal spores.

Another zombie-lover favorite, the "Resident Evil" franchise, tells a story that is less relevant to real-life disease spread, Smith said. "Resident Evil" zombies tend to mutate in ways that are more fanciful than scientific. The "Leech Zombie," for example, is a human corpse that has had all of its blood sucked out, and is controlled by aggressive leeches. That's not something infectious-disease specialists lose sleep over.

Smith isn't the first to use zombies to raise awareness of real-life pandemics. In 2011, a jokey post on the Centers for Disease Control and Prevention (CDC) blog nearly brought down the blog's servers because of all the Web traffic to the site. The idea was to urge people to get prepared for real-life disasters through the lens of zombie mayhem, a CDC spokesman told Live Science at the time.

Tens of thousands of people clicked the post, and probably picked up some good tips on assembling emergency kits of food and water in the process. Likewise, Smith said the solutions she calls for in her faux zombie response paper are resources that are needed to combat the real threats of pandemic diseases and antibiotic resistance.

"Research and funding, and international collaboration and communication, and all these preparations — they're all the same for any kind of emerging disease," Smith said. "Including the zombie pandemic."