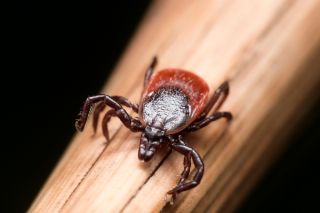 This means that a visit to a Christmas tree farm could bring an unexpected encounter with a bloodsucking hitchhiker.

Adult ticks are normally at their most active during the spring and summer months, and their activity usually tapers off as cold weather arrives. But deer ticks "will continue to be [active] until temperatures are consistently below 40 degrees," a representative from the New York State Department of Health told Live Science in an email. [Gross! Watch a Tick Bite in Action (Video)]

This means that Christmas tree shoppers in the Northeast may want to take extra precautions this year to avoid getting bitten. Walking through a shrubby landscape on the way to select a Christmas tree could expose people to the active ticks, said Richard Ostfeld, a senior scientist with the Cary Institute of Ecosystem Studies in Millbrook, New York.

When it's cold, ticks protect themselves by hiding in earth or under leaf litter, where they don't pose a threat to people. But warmer weather makes it safe for them to go looking for something to bite, Ostfeld told Live Science. A hungry tick will leave warmth and safety behind to climb tall grasses, shrubs and brush that reach about 18 to 24 inches (46 to 61 centimeters) high. This height perfectly positions the tick to reach a person's leg, Ostfeld said.

Blacklegged ticks can carry a number of diseases. The most common disease that ticks around New York spread to people is Lyme disease, according to the New York State Department of Health.

The good news, Ostfeld told Live Science, is that the adult ticks that are active in winter are easier to spot and remove than their smaller nymph forms, which are more common in warmer months. Performing tick checks — on both clothing and bare skin — after walking through an area where ticks might be found is highly recommended, he added.

And although fresh-cut Christmas trees themselves can certainly play host to plenty of living things, with aphids and spiders emerging as the most common hitchhikers, they don't generally hold ticks, Ostfeld told Live Science. Even this year, when ticks are unusually active, the trees "would be an unlikely place for the ticks to seek a host," he said.

One reason for this is that ticks tend not to climb very far from the ground, Ostfeld said. Even if they did take up residence on a tree bound for someone's living room, they would probably drop off or die long before the tree reached its destination, he said.

Overall, the risk of bug invaders riding a Christmas tree all the way into your living room is actually quite small, according to the Penn State Department of Entomology. Vigorous shaking is usually enough to dislodge any insect stowaways, though egg masses may have to be removed by hand.