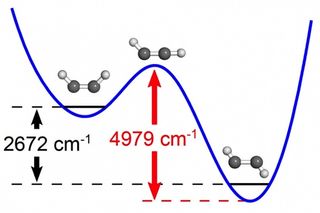 For the first time, scientists have accomplished a feat long thought impossible — they have measured the energy of incredibly short-lived arrangements of atoms that occur as chemical reactions are happening.

This finding could help shed light on the precise inner workings of chemical reactions too complex to understand by other methods, the researchers said.

The chemical reactions responsible for life, death and everything in between involve molecules transforming from one kind to another — essentially, from reactants to products. As chemical reactions occur, fleeting and unstable arrangements of atoms, known as transition states, exist as molecular bonds break and form between atoms. [Wacky Physics: The Coolest Little Particles in Nature]

"Reactants and products are stable valleys on either side of a mountain range, and the transition state is the pass," study lead author Joshua Baraban, a physical chemist at the University of Colorado Boulder, said in a statement. "Because it only exists as you go from one thing to another, it's never really been thought of as something that you can easily study directly."

Now, for the first time, scientists have measured the amount of energy required to reach a transition state.

The researchers investigated a kind of chemical reaction known as an isomerization, in which a molecule undergoes a change of structure. They focused on a molecule known as acetylene, which consists of two carbon atoms and two hydrogen atoms.

When acetylene absorbs energy, there are two conformations it can adopt, which can be visualized by imagining the atoms as balls and the molecular bonds connecting the atoms as sticks. In acetylene, the carbon atoms are bound to each other and make up the middle of the molecule, and each carbon atom has one hydrogen atom attached to it.

With a bit of energy, the zigzag version of acetylene can become the U-shaped kind, the researchers said. In between, a transitional state occurs where one of the hydrogen atoms is not positioned on either side of the carbon-carbon bond, but instead is almost in line with it.

This kind of change in conformation is also an important part of how the eye works. "When light enters the eye, it causes this kind of change we see in acetylene, which starts a chain reaction that sends information that the eye has seen a photon to the brain," Baraban said.

Future research can analyze more complex reactions, such as ones where two molecules come together or one molecule breaks into two, the scientists said.

Baraban, along with study senior author Robert Field at MIT and colleagues, detailed their findings online today (Dec. 10) in the journal Science.