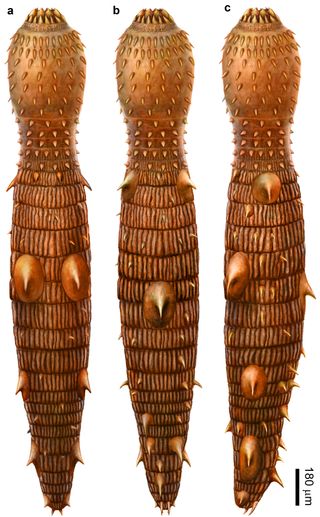 An artist’s reconstruction of Eokinorhynchus rarus, a 535-million-year-old fossil from China. Measuring only a few millimeters in length, E. rarus is related to the ancestor of the group that includes arthropods and other molting animals.
(Image: © Dinghua Yang at Nanjing Institute of Geology and Paleontology)

Like the fictional, fearsome sandworms from the "Dune" sci-fi novels, a recently discovered worm that lived 535 million years ago had an armored body, a mouth ringed with teeth and rows of thornlike spines on its flanks. But while the "Dune" sandworms were big enough to carry people on their backs, this ancient species, whose modern relatives are known as "mud dragons," was significantly smaller, measuring less than a tenth of an inch (2 millimeters) in length.

But turn the dial back to the Cambrian period (543 million to 490 million years ago), and the mountains disappear, replaced by a shallow, phosphate-rich ocean, according to previous research. Marine "mud dragon" E. rarus would have made its home in the sea bottom's sediments. [Watch Ancient 'Ironman' Worm Was 'Armed' and Armored | Video]

And the phosphate in the oceans is what fossilized them millions of years ago, replacing their bodies' soft tissue with calcium phosphate, the material that makes up human teeth and bones.

Finding microscopic fossils of tiny organisms like E. rarus is far from easy. Shuhai Xiao, a professor of geobiology at Virginia Tech and corresponding author of the study, told Live Science that he and his colleagues excavated about half a ton (500 kilograms) of rock from the site. In other words, they literally moved mountains to find traces of ancient life.

"The fossils are so small that you can't see them in the field," Xiao said. So the scientists brought half a ton of rocks into the lab. They dissolved the rocks using acetic acid, which is similar to vinegar and had no effect on the calcium phosphate fossils. Once the hundreds of kilograms of chalky rock had melted away, a handful of tiny fossils remained.

Then came time for the really challenging part: identifying them. Merely processing samples this small is "a tricky business," Xiao told Live Science, partly because of their size and partly because of how delicate they are. "You can't shake or sieve the residue violently, or you'll break them," he said.

Finding E. rarus, however, made all the effort worthwhile. The study describes a head that tapers to a pinched-in region where it meets the neck. There are at least 20 armored body segments, each one circled by plates and studded with spines, and five additional pairs of large spines span the worm's trunk.

Spiky E. rarus shares similarities with a small group of marine invertebrates still around today, called kinorhynchs (KIE-no-rinks.) These tiny, armor-plated worms originated during the Cambrian explosion — a period of time when life on Earth diversified dramatically — and are part of a larger group that includes molting animals like arthropods.

Some of the features E. rarus has in common with modern kinorhynchs are its segmented, limbless body and its spines, though E. rarus' spines are larger than those of its distant kinorhynch relatives. According to the study authors, E. rarus may well be an ancestor of this lineage. [See Cambrian Creatures Gallery: Photos of Primitive Sea Life]

E. rarus also helped the scientists to recognize "orphan" fossil fragments of its species that had been found years before but had not been fully described. Now that Xiao and his colleagues have a complete fossil of the ancient worm to compare the fragments to, broken pieces that were previously unidentifiable are falling into place.

For such a small fossil, E. rarus is big news. Kinorhynchs are poorly represented in the fossil record; though they've been around for half a billion years, their evolutionary history is largely undocumented. According to the study, kinorhynchs could provide important clues about how segmented bodies evolved — and until now, all that was missing were the fossils. "So, this discovery has a lot of implications," Xiao told Live Science.

The findings were published online today (Nov. 26) in the journal Scientific Reports.