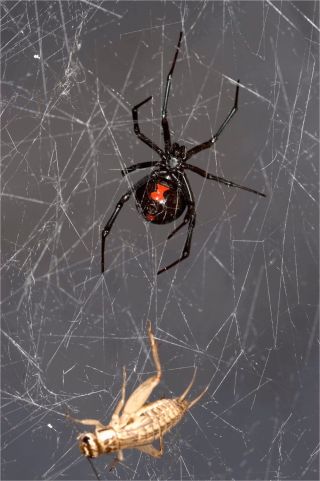 A web-spinning black widow and its prey, the house cricket.
(Image: © Scott Camazine)

You may want to think twice before vacuuming up any pesky cobwebs you find around your home — these messy spider lairs may contain valuable information (valuable to scientists, that is).

A spider's sticky web contains traces of the critter's DNA, as well as the DNA of whatever prey that was unlucky enough to get stuck in the web, according to a new study, which found that these tiny samples of DNA can be amplified and sequenced in a lab. In other words, an empty spider web isn't a mystery; it's a clue that can tell scientists what kind of spider built the web and what prey it snagged in its trap.

Knowing exactly which species of spider built a web in a certain area, as well as knowing what that spider feasted on, is important information for researchers in a variety of fields — from conservation ecology to pest management, said study lead author Charles C.Y. Xu, a graduate student in the Erasmus Mundus Master Programme (MEME) in evolutionary biology, a joint program hosted by four European universities and Harvard University in the United States. [Creepy, Crawly & Incredible: Photos of Spiders]

"There's a variety of different methods to study [spiders]," Xu told Live Science. To collect specimens, researchers try everything from beating (literally beating on a tree until spiders and other insects fall from it) to the aspiration method, which is when a researcher sucks a spider or insect into a glass vial through a rubber tube.

But genetic sequencing, which is becoming less expensive, enables new methods of collecting information about spiders and their prey — methods that don't involve chasing, capturing or killing these critters, Xu said.

For the study, Xu and his colleagues studied the webs of three black widow spiders that were kept in separate enclosures. They fed each spider two crickets and, several days later, removed the webs from the enclosures and brought them to a lab. Then, they extracted DNA from the spiders' webs, with the goal of identifying DNA from the Southern black widow (Latrodectus mactans) that made the web and the house crickets (Acheta domesticus) that landed in it.

"In order to study DNA, you have to first make a lot of it," Xu said. "So we used primers, which are single-stranded DNA fragments that target particular regions of DNA that we want to study." These primers amplify DNA, or cause it to create millions of copies of itself.

DNA barcoding has been used in the past to identify new organisms, including jellyfish, bats and fungi. And scientists around the world are actively building a database of DNA bar codes for hundreds of thousands of species — an initiative that began in 2007. But barcoding DNA from a spider web had never been attempted before this study, Xu said.

Xu and his team had a leg up when it came to identifying the DNA they extracted from the black widows' webs; they already knew what DNA they were looking for (that of black widows and house crickets). This allowed them to create primers that amplified the right kind of genes — the mitochondrial genes that form the species' DNA bar codes. But a slightly modified technique could also be used to identify DNA from any web, even if a researcher isn't sure what kind of spider made it or what kind of prey the spider captured. [Amazing Photos of Spiders from Around the World]

Using this technique, known as "next generation meta-barcoding sequencing," researchers could simply walk into a forest or field, collect any spider webs they might stumble upon and then sequence the webs' DNA in a lab without knowing beforehand what kind of DNA is on the web. The more advanced technique could give researchers detailed insight into the kinds of spiders and insects that reside in a particular area, Xu said. DNA can remain on a web for long periods of time (at least 88 days, in the case of one of the webs used in the study), he added.

"These genetic technologies can be a lot more sensitive than traditional sampling methods and enable us to detect DNA of any spider or insect without having to specify which species we're looking for in the first place," Xu said. "They could allow earlier detection of [endangered or invasive] species. For endangered organisms, it could be important for marking off new conservation areas, or for invasive species, redrawing the invasive range."

But ecologists aren't the only ones who might find it useful to extract DNA from a spider's web. Pest management researchers could use meta-barcoding sequencing to find out what kinds of spiders are hitching rides inside crates of imported goods, or to discover which species of spiders have invaded a person's home. And those who study biogeography (the study of the distribution and evolution of species over time and geographic location) could extract DNA from spider webs to understand population differentiation within a single species.

"If you can collect the DNA without having to capture the organisms themselves and kill them, it makes the process a whole lot easier," Xu said. And this method of "collecting" spiders could make it easier for citizen scientists to assist in research projects or to find out more about their local ecosystems, he added.

Going forward, Xu said he'd like to spend some time in the woods, collecting webs and then trying to figure out which members of the local spider and insect community left their DNA behind on the sticky silk.

The new study was published today (Nov. 25) in the journal PLOS ONE.