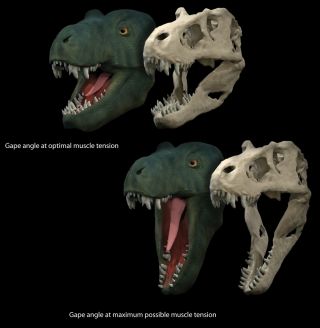 Picture a meat-eating dinosaur like T. rex in action, and you probably imagine a tooth-filled mouth gaping wide to chomp down on its prey. But just how much could the notorious predator's jaw stretch? A new study has answers about the breaking point for a T. rex’s bite.

A jaw that hinges wide improves a predator's chances of getting a good grip on larger prey. It also means that the predator can generate enough force to actually bite through its prey. By studying how wide an extinct carnivore's jaw could stretch, scientists can piece together what size and type of prey the animal may have hunted, or what its hunting behavior might have been like.

Recently, Stephan Lautenschlager, a vertebrate paleontologist at the University of Bristol in the United Kingdom, conducted the first investigation to link dinosaurs' jaw muscles to the animals' feeding habits. [Gory Guts: Photos of a T. Rex Autopsy]

"Up to now, no studies have actually focused on the relation between jaw musculature, feeding style and the maximum possible jaw gape," Lautenschlager said in a statement. In short, muscles have limits, and Lautenschlager wanted to test them.

Analyzing muscle action in an extinct animal requires reconstructing those muscles from marks, like small depressions or rough surfaces, left behind on the bones, Lautenschlager told Live Science in an email. He scanned the skulls of three theropods, a diverse group of two-legged dinosaurs that includes the biggest terrestrial carnivores that ever lived.

From the scans, Lautenschlager built 3D digital models of skulls representing Tyrannosaurus rex, another meat-eater named Allosaurus fragilis and plant-eater Erlikosaurus andrewsi. Lautenschlager then attached cylinder-shaped muscles to connect jaws to skulls. To test muscle ranges, he opened and closed the models' jaws, analyzing the changing lengths of the muscles as they stretched and relaxed.

Plant-eater E. andrewsi's muscles reached maximum tension first, when the jaw opened to an angle of 45 degrees. This isn't surprising, as herbivores munch on leaves and branches, typically not encountering food that demands stretching their jaws wide. This is known from feeding behavior in plant-eaters alive today, the researchers said. Carnivorous theropods T. rex and Al. fragilis opened much wider, with Al. fragilis gaping up to 92 degrees before its jaw muscles were strained to the limit.

However, opening wide isn't necessarily a predator's best strategy. When muscle fibers stretch to maximum tension, it decreases the power of the bite. "It is more difficult to eat harder or tougher food at large gapes, because it's more difficult to produce enough bite force with stretched muscles," Z. Jack Tseng, a paleontologist at the American Museum of Natural History in New York City, who studies bite-force biomechanics in extinct carnivores but was not involved in the study, told Live Science.

Lautenschlager's calculations showed that, in both carnivores, muscles performed best when the jaws were open between 28 and 32.5 degrees. But differences in jaw stretch capabilities hinted that the two theropods employed different feeding techniques, the researchers said. T. rex's gape stopped at 80 degrees, but Lautenschlager discovered that the dinosaur's muscles allowed it to bite with equal power through a range of angles, sustaining considerable force that could crush the predator's prey or rip it to pieces.

Al. fragilis, the study explained, more likely used a less forceful "strike-and-tear" hunting method, instead of T. rex's "puncture-and-pull" approach. But by stretching its jaw wide, what Al. fragilis sacrificed in power it could have made up in speed, enabling its jaws to snap shut more quickly. "The larger the gape, the more distance there is to accelerate jaw closure," Tseng said.

As with all computer models, though, there's always a measure of uncertainty, experts said. "It is possible to reconstruct dinosaur muscles — of any part of the body — with some confidence," John R. Hutchinson, a professor of evolutionary biomechanics at the Royal Veterinary College in London, who was not part of the study, told Live Science. "But we are still figuring out the limits of what we can reconstruct or estimate and with what levels of accuracy, and how important the uncertainties that remain still are.

"This is another step forward in a long lineage of studies gradually adding layers of complexity into 3D models like these of dinosaurs, and gradually asking more-complex questions," Hutchinson said.

The findings were detailed Nov. 4 in the journal Royal Society Open Science.