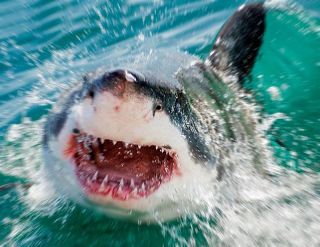 Massive great white sharks launching their 3-ton bodies out of the ocean and into the air can be a spectacular sight, if you're lucky enough (and brave enough) to be in the right place at the right time.

And now a marine photographer has captured the predators in all their glory as they breached without warning, deadly missiles aimed squarely at their seal prey.

"I've been in the water with sharks, but the emotion of seeing them flying like a UFO is really something," Daniel Botelho told Live Science. "I wanted to capture each of the angles, each of the moments, piecing together the anatomy of a shark attack." [See Photos of Great White Sharks Breaching]

Botelho hit the shark jackpot in Gansbaai, South Africa. In the waters of the Great White Shark Capital, great whites breach more than anywhere else in the world. He spent three months in Gansbaai's "Shark Alley," poised to catch that elusive moment on camera. And catch it he did, over and over: just before their toothy mouths broke the surface, in the seconds just after, and—arguably the most dramatic sight of all—when their massive bodies appeared to levitate in the air just over the water, carried by their own considerable momentum.

Blink and you'll miss it

Though they tip the scales at more than 3,000 pounds (1,361 kilograms), great white sharks are perhaps surprisingly quick and quiet enough to pull off lightning-fast sneak attacks.

According to Botelho, Shark Alley's great whites did most of their hunting — and were most likely to breach — during the 3-hour period following sunrise and the 2 hours before sunset. He spent most of that time crouching motionless on the deck of a boat with a camera pressed to his face, waiting patiently for a moment of heart-stopping action that could happen at any time, and without any warning whatsoever.

Movies and television shows about sharks use dramatic editing and ominous music cues to prepare viewers for a shark's big entrance. But real life just isn't like that,  Botelho said.

"It's so quick and so quiet, it's scary to see it happen. We can never predict it," he said.

Botelho indeed chose the perfect location for watching the sharks leap from the water. A unique combination of prey species and environment make breaching common for great whites off the coast of South Africa, Neil Hammerschlag, research assistant professor at the University of Miami's Rosenstiel School and Abess Center for Ecosystem Policy and Science, told Live Science.

Near South Africa's Seal Island, where many great whites hunt, the waters are deep and murky. They prey on Cape fur seals, which spend most of their time near the surface. Hammerschlag described sharks lurking in the depths, watching for a silhouette, and then launching their bodies in a vertical strike that often carries them out of the water completely.

But predator and prey are closely matched, with the shark's power and speed pitted against the seal's considerable acrobatic prowess. "To be successful, the sharks have to kill them on the initial strike," said Hammerschlag, who studies hunting behavior in great whites. His research has shown that the longer the attack continued, the more likely the seal was to escape.

Caught in the act

Dramatic as breaching is, it lasts only a few seconds, and snapping a photograph at just the right moment is supremely difficult. Just photographing a shark's trademark "smile" is much harder than it looks, explained Gavin Naylor, a biology professor at the College of Charleston, who studies the evolution of sharks and rays. [See More Photos of Great White Sharks]

"If you Google 'shark pictures' and you see all these photos with the open mouths, it gives you the false impression that they go around like this all the time," Naylor told Live Science. "Most of the time sharks are just cruising around. These photos represent just a small fraction of their waking day."

How sharks occupy their days — all sharks, not just great whites — is, for the most part, still mysterious. Observing them in the wild is difficult, and much about their behavior and biology remains elusive. As Naylor put it, "There isn't an organism on the planet that's so well known and so poorly understood."

Sharks have roamed Earth's seas for more than 400 million years, diversifying into more than 400 species alive today that range in length from 8 inches to 40 feet (20 centimeters to 12 meters). They live near coastlines and in the open ocean, in warm and cold waters, and in a variety of ocean depths.

And according to scientists who study sharks, we still have a lot to learn about them. Naylor points to Greenland sharks as one example. Larger than great whites, Greenland sharks seem too heavy and sluggish to catch agile prey like seals. But researchers have found seal remains in Greenland shark bellies.

"They've got some tricks we haven't seen yet," Naylor added.

At the end of the day, the sight of an enormous great white shark exploding from a calm and unruffled ocean surface, seemingly out of nowhere, is simply awe-inspiring — unless you happen to be a seal. But for a photographer, the moment is pure gold.

"It's the type of second that lasts forever, and at the same time, it's really, really fast," Botelho told Live Science. "When you see the results, it's worth all of the effort."