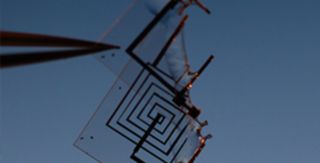 New materials from DARPA can self-destruct after they've been used on the battlefield or as part of disaster relief efforts.
(Image: © DARPA)

Picture this: A tiny, floating device delivers a package into your arms, and then, before you can say "thanks," it disappears into thin air. Such a magical device may sound like something out of a Harry Potter movie, but it's real technology that could benefit people in remote areas.

The development of this far-out delivery system is being led by the Defense Advanced Research Projects Agency (DARPA), the branch of the U.S. Department of Defense charged with developing new technologies for the U.S. military. Several years ago, DARPA launched its Vanishing Programmable Resources (VAPR) program, which is devoted to building small electronic systems that do their jobs and then self-destruct.

Although it might sound counterintuitive to build something that's going to disappear, self-destructing systems are useful for a range of situations, according to DARPA. For example, sophisticated technologies (such as environmental sensors or communications tools) are often used on battlefields and then are left behind, where they can be scooped up by people who aren't authorized to use them, making them risky. Discarded electronics also pose a threat to the environment as they rust and decompose. But electronics that just disappear aren't saddled with these problems, DARPA officials said. [Humanoid Robots to Flying Cars: 10 Coolest DARPA Projects]

VAPR researchers have already developed a few materials that can disappear into thin air, including a small polymer panel that literally goes "poof," changing from a solid into a gas. Researchers also developed a glass material embedded with electronics that shatters into tiny particles after use.

"With the progress made in VAPR, it became plausible to imagine building larger, more robust structures using these materials for an even wider array of applications," Troy Olsson, DARPA's VAPR program manager, said in a statement.

Creating vanishing delivery vehicles is the next order of business for DARPA, which recently announced a new program called ICARUS — short for Inbound, Controlled, Air-Releasable, Unrecoverable Systems  — to develop the technology.

The program is named for the Icarus of Greek mythology, whose waxy wings melted when he flew too close to the sun. The mythological character fell into the sea and drowned. But a happier ending is expected for DARPA's ICARUS, which calls for the "design and prototyping of vanishing air delivery vehicles capable of precise, gentle drops of small payloads."

The flying vehicles could be used to deliver materials such as food, water and vaccines to people living in remote parts of the world, or to transport supplies to people who have been stranded by natural disasters. Normally, the organizations that distribute such materials either return to collect the vehicles they used to drop the supplies or leave the vehicles on the ground to decompose. The option to just drop something out of a plane and then totally forget about it hasn't existed, according to DARPA.

Just don't expect these vanishing vehicles to replace your local mail delivery person or even high-tech delivery drones. DARPA said the seemingly magical devices would be used only in "extenuating circumstances" in which no other delivery options are feasible.