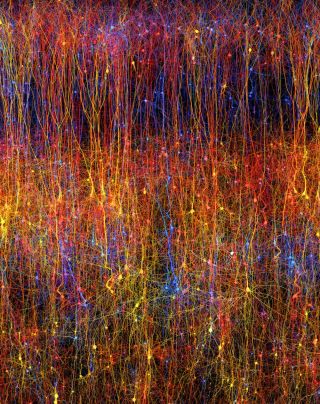 Scientists have digitally recreated a slice of a juvenile rat's brain — including 31,000 brain cells, of 207 different types, with 37 million connections.

The computer-simulated brain achievement is part of the Blue Brain Project, whose aim is to create a rat brain and, eventually, a human brain inside a computer.

Though the new simulation recreates just a tiny sliver of the rat's brain, the result seems to capture some of the fundamental behavior of neurons, and has even predicted brain behavior that hadn't been found before, the researchers reported Thursday (Oct. 8) in the journal Cell. [See Images of the Digital Rat Brain]

The team first conducted tens of thousands of experiments in live juvenile rats, painstakingly cataloging the types of neurons and synapses, or brain cell connections. After watching the firing of the rat brain cells, the researchers derived principles that governed how the brain cells were arranged.

Yet those experiments covered only a tiny fraction of the connections in this brain region, called the neocortex. To fill out the rest of the picture, the team used a computer program to search all of the existing literature for other data on how neurons in the neocortex function.

"We can't — and don't — have to measure everything," study author Henry Markram, director of the Blue Brain Project at École Polytechnique Fédérale de Lausanne (EPFL) in Switzerland, said in a statement. "The brain is a well-ordered structure, so once you begin to understand the order at the microscopic level, you can start to predict much of the missing data."

From there, the team created a 3D computer model of neurons in a virtual volume, using rules about how different neurons are distributed to guide their placement. They created connections, or synapses, wherever these neurons "touched," leading to about 600 million connections between neurons, said study co-author Michael Reimann, a neuroinformatics researcher at EPFL. From there, they used five basic biological rules for how connections form to prune these connections, leaving 37 million connections.

Then, the researchers integrated their findings from experiments and other research teams to reconstruct how these connections worked. The new brain seems to closely match the connectivity found in real tissue studied under electron microscopes.

After all that, the team was finally ready to watch the virtual brain firing. The computer simulation solved billions of equations for every 25 microseconds of neuronal activity.

The team ran "experiments" on the virtual rat brain that mimicked experiments done on real rats.

The digital neurons seemed to behave just like physical neurons do in the lab. For instance, both the in silico and the biological brain tissue showed "triplet" firing patterns, wherein three neurons fire together in a precisely timed sequence. The brain simulation found that these triplets occurred only at specific times.

The digital brain tissue also revealed "chorist" neurons, or brain cells whose activity is tightly synchronized to that of their neighboring cells. Other cells, called "soloists," seem to fire independently of their neighboring neurons. [10 Things You Didn't Know About the Brain]

The digital rat-brain tissue also revealed new findings that could apply to biological systems. For instance, higher calcium levels shifted the virtual brain tissue into a sleeplike pattern, while lower levels seemed to wake up the digital brain tissue.

"When we decreased the calcium levels to match those found in awake animals and introduced the effect that this has on the synapses, the circuit behaved asynchronously, like neural circuits in awake animals," lead study author Eilif Muller, a physicist at EPFL, said in the statement.

Still, the new brain simulation is just a first draft, Markram said. To get a more thorough representation of the brain, the simulation would need to include other types of brain cells, such as glia, as well as blood vessels. The virtual brain also only includes direct communications between individual brain cells, but a more realistic simulation would account for neuromodulation, in which free-floating brain chemicals tune the behavior of large swaths of neurons in one go, the researchers said.