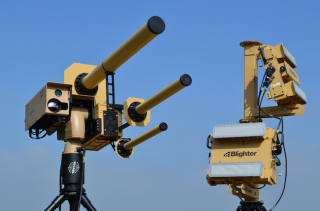 A new device that can detect, target and deter commercial drones could be used to keep the flying robots away from areas where they're not wanted, like government properties, airports or your own backyard.

The new Anti-UAV Defense System (AUDS) was developed by three tech companies in the United Kingdom. It has a radar detection component, advanced tracking capabilities and a sneaky little onboard device that keeps drones at bay.

Rather than melting drones in midair like Boeing's new Compact Laser Weapons System, AUDS shoots the flying vehicles with something that doesn't destroy them — radio waves. Drone operators typically communicate with, and direct, the aerial bots using radio signals. [5 Surprising Ways Drones Could Be Used in the Future]

Enter AUDS, which uses a drone's communication system against it. Using directional antennas pointed at the drone, AUDS sends the unmanned aerial vehicle (UAV) radio signals that interfere with the radio signals coming from the remote operator. When the drone picks up AUDS' signals, it "freezes," unsure of where to fly.

Whoever is controlling the anti-drone system can keep the UAV hovering at a distance until the machine runs out of battery life and crashes to the ground, according to a report by the BBC.

AUDS can spot a drone from about 5 miles (8 kilometers) away. After zeroing in on its target, it uses video and thermal imaging software to keep the flying vehicle in its sight. Once the drone gets close enough to the anti-drone system, it's "game over" for the drone.

Even though drones can be incredibly useful— they can help conservationists keep tabs on protected areas and help farmers survey their crops more quickly — these flying robots have stirred up quite a few problems in recent months.

Just today (Oct. 9), two people operating a small drone near the Washington Monument in Washington, D.C., accidentally crashed their UAV on the back lawn of the White House. A similar incident occurred at the presidential residence in January. Drones are prohibited from flying in the U.S. capital, but laws and heavy fines don't seem to keep all drones out.

Commercial drones have also been used in attempts to smuggle contraband goods, like cellphones and weapons, into prisons. And camera-toting drones hovering over private homes have been derided as both a security and privacy concern for residents.

The U.S. Federal Aviation Administration (FAA), which sets guidelines for how and where commercial drones can be flown, has ruled that small UAVs cannot be flown within 5 miles of airports and that they must remain below 400 feet (122 meters), where they are unlikely to interfere with piloted aircraft.

But a recent deluge of complaints from pilots, as well as U.S. Forest Service employees who have spotted the flying bots near wildfires, has led the FAA to take further action against rule-breaking drone operators. The FAA signed an agreement this week that will allow it to test technologies that can detect the position of operators who are flying their drones in restricted areas, such as near airports, according to a report by Phys.org.

Though the AUDS system doesn't promise to help locate errant drone operators, it could be used to keep drones away from restricted areas altogether. The radio-jamming technology aboard AUDS doesn't scramble signals from commercial or military aircraft, which use encrypted signals, so it might be safe to use near airports.

The new anti-drone system has been tested in the United Kingdom, the United States and France, according to the BBC. But there's no word yet on when or where this drone-freezing technology could be used in these countries.