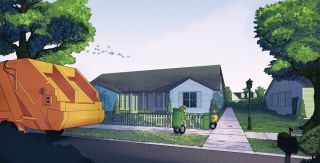 An artist's depiction of how the trash-hauling robots might operate.
(Image: © Adrian Wirén, Mälardalens Högskola, Courtesy of Volvo Group)

Highly efficient robots on wheels could soon be hauling trash in a neighborhood near you.

Together with universities in Sweden and the United States, Swedish auto manufacturer Volvo is developing these useful robots, which will be able to roll around a neighborhood, pick up waste bins and chuck the trash into the back of garbage trucks.

The project is called Robot-based Autonomous Refuse handling, or ROAR, and while it may have some sanitation workers worried (there are typically human workers on the backs of trucks who manually empty bins), it could be a boon for garbage truck drivers, who would simply need to pull up to the curb and let the robots do the rest. [Super-Intelligent Machines: 7 Robotic Futures]

Drivers will control the bots using an onboard operating system and won't have to do any of the heavy lifting themselves, according to Volvo.

The refuse robots are part of a larger initiative by the auto company to create "a future with more automation," Per-Lage Götvall, the ROAR project leader, said in a statement.

To bring ROAR to life, Volvo recruited roboticists from Mälardalen University in Sweden. Students there will help design and build robots that can move discreetly and efficiently from house to house and that are strong enough to pick up heavy bins. Another Swedish institution, Chalmers University of Technology, will work on the overall operating system for ROAR.

"Chalmers has for many years developed the technology for the control and coordination of autonomous systems," Petter Falkman, associate professor of automation at Chalmers, said in a statement. "And we see that we can deal with problems of the complex type that waste-handling entails."

In the U.S., students at Pennsylvania State University's Thomas D. Larson Pennsylvania Transportation Institute will design the virtual system and control panel that truck drivers need to keep tabs on the trash-toting bots.

Finally, the Swedish waste management company Renova will develop a garbage truck that can accommodate the automated system and, presumably, carry around the robots when they're not hauling trash. The futuristic project is expected to be ready for testing by June 2016.