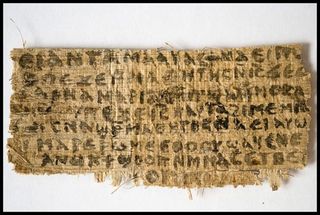 The business card-sized fragment of papyrus now called the Gospel of Jesus's Wife contains a translated line which says "Jesus said to them, 'My wife …'" and also refers to a "Mary," possibly Mary Magdalene.
(Image: © courtesy of Harvard Divinity School)

The search to uncover the true story behind the "Gospel of Jesus's Wife," a controversial papyrus that suggests that Jesus Christ had a wife, has extended beyond the theology halls of Harvard Divinity School, back to 1960s East Germany.

The origin of the papyrus has remained elusive, and many scholars debate the document's authenticity.

Now, records obtained from various sources by Live Science — many of which are publicly available online in databases in Florida and Germany, as well as on the Internet Archive— show that if the papyrus is authentic, the story behind how it came to the United States would be astounding. The records also describe how, if the papyrus is fake, the forger (or forgers) may have crafted such a realistic specimen.

Specifically, the documents provide a detailed account of the life of Hans-Ulrich Laukamp, the alleged former owner of the Gospel of Jesus's Wife. They describe a highly skilled industrialist who built a business with operations in Florida and Germany. Laukamp is a key figure in the debate of whether the papyrus is authentic, and may hold the key to solving this mystery. [6 Archaeological Forgeries That Could Have Change History]

Karen King, a professor at Harvard Divinity School, first announced the discovery of the so-called Gospel of Jesus's Wife in September 2012. Written in Coptic (an Egyptian language), the papyrus fragment contains a translated line that reads, "Jesus said to them, 'My wife …'" and also refers to a "Mary," possibly Mary Magdalene.  [Read Translation of Gospel of Jesus's Wife Papyrus]

King has said the papyrus doesn't prove that Jesus himself was actually married, but rather that some people, who lived after Jesus' time, believed he was.

Radiocarbon dating indicates that the papyrus dates to around A.D. 800, and tests on the papyrus's ink confirm that it could have been created at that time.

Based on these findings, King and a few other scholars have argued that the text is authentic, as it could be a copy of a text written in earlier times. However, a number of scholars have noted peculiar features of the "gospel's" writing that suggest it is a modern forgery — one possibly based off a text that first appeared online in 1997.

"Those in favor of [the] authenticity [argument] have, since the beginning [when the text was discovered], looked to scientific testing — carbon dating, ink analysis — to justify their claims," Joel Baden and Candida Moss, professors at Yale University and Notre Dame University, respectively, wrote in an article published in September in The Atlantic. "Those who believe it is a forgery have leaned on the analysis of letter forms, of grammar, of syntax."

The current owner of the papyrus has insisted on remaining anonymous. He provided King with signed documents that claim he bought the papyrus in 1999 from Laukamp, and that Laukamp got it from Potsdam, in what was East Germany, in 1963. (The exact location where he would have gotten the papyrus in Potsdam is unknown.) [Religious Mysteries: 8 Alleged Relics of Jesus]

Laukamp died in 2002, and the claim that he owned the text has been strongly disputed by Rene Ernest, the man whom Laukamp and his wife Helga charged with representing their estate. Ernest told Live Science that Laukamp had no interest in antiquities, did not collect them and was living in West Berlin in 1963 and thus couldn't have traveled to Potsdam from across the Berlin Wall. (West Berliners were not allowed to visit Potsdam at that time.)

Similarly, Axel Herzsprung, Laukamp's friend and business associate, told Live Science that Laukamp never had an interest in antiquities and never owned a papyrus. Laukamp has no children or living relatives who could verify these claims.

The newly obtained records show that, between 1995 and 2002, Laukamp was the owner of a fast-growing manufacturing company called ACMB (American Corporation for Milling and Boreworks). By 2000, Laukamp's operations had expanded to encompass a 25,000-square-foot (2,300 square meters) factory in Berlin, an office in Florida and a staff that included scientists, engineers and skilled tradespeople.

Laukamp and his wife moved to Venice, Florida, in 1997. The records show that in 2001, after Helga had died, he wrapped up his affairs in the United States and departed for Berlin, where he passed away. Laukamp's company collapsed not long after his death in 2002.

If the "Jesus's Wife" papyrus is authentic, it would mean that Laukamp would have had to figure out a way to reach Potsdam in 1963. In that year, West Berliners could only travel to East Berlin at Christmas, and only if they had family on that side of the city, according to historical records from that time period. President John F. Kennedy himself protested these conditions, flying to West Berlin in 1963 to give his famous "Ich bin ein Berliner" speech.

If Laukamp did try to reach Potsdam, he would have risked being caught and would have had to explain to East German, and possibly Soviet, authorities that the papyrus he was carrying, with the Coptic handwriting, was simply an ancient papyrus and not a coded message.

The new records offer few clues as to how Laukamp could have reached Potsdam from West Berlin in 1963. The documents show that Laukamp was technically proficient with automobiles and motorcycles, as his business manufactured a variety of products for the automobile industry and Laukamp himself co-patented a new motorcycle brake design. Whether these skills could have helped him get over the Berlin Wall and reach Potsdam while avoiding East German police is unknown.

Another possibility is that Laukamp got into Potsdam with the help of East German or Soviet authorities. If this is true, it raises questions as to what involvement these authorities could have had in the Gospel of Jesus's Wife.

If the papyrus is authentic, it would mean Laukamp withheld its existence (and his interest in antiquities) from Ernest and that he concealed it from Herzsprung, his friend and business associate.

Does the signature fit?

As Live Science reported in August, five notarized documents have been found that together held seven of Laukamp's signatures, dating to between 1997 and 2001. In a 2014 article published in Harvard Theological Review, King said she had a copy of the signed document recording the sale of the papyrus. With that document, Harvard scientists could work with forensic handwriting experts to verify the signature on the sale document.

If the signature on the sale record is Laukamp's, the origins of the papyrus (whether authentic or fake) lie with him. On the other hand, if Laukamp's signature was forged, then the papyrus is likely a fake and the anonymous owner may have been involved in the forgery.

Whether Harvard researchers are performing these tests is unknown. King and communications staff at Harvard Divinity School have not responded to requests for comment.

Could Laukamp have forged it?

Many scholars believe that the Gospel of Jesus's Wife is a fake that was likely created by Laukamp or the anonymous owner.

King said in the 2014 Harvard Theological Review article that although it's theoretically possible to create a gospel that could withstand scientific testing, such a creation would require a "clever forger" with sophisticated technical skills to pull it off. The new records show that the people whom Laukamp employed or otherwise worked with were scientists, engineers and skilled tradespeople.

The newly discovered records indicate that if Laukamp helped to forge the papyrus, his motivation might have been monetary. The records show that in the period leading up to 1999, Laukamp was spending a large amount of cash: He had built a new factory in Berlin that encompassed 25,000 square feet; he bought a newly built house in Venice, Florida; he opened a branch office of ACMB in the same city; and he hired additional staff for his business.

Did the anonymous owner forge it?

If the anonymous owner forged the papyrus, it would mean that he or someone working with him likely had knowledge of Laukamp's personal life, including that Laukamp had no children and no living relatives who could talk to Harvard or the news media when the discovery was announced. The Gospel of Jesus's Wife has generated a tremendous amount of media coverage all over the world and was even the focus of a Smithsonian documentary.

Paul Barford, an independent archaeologist who writes about antiquities collecting, noted that a forger would find it "convenient" that Laukamp had no living relatives who could speak for him.

The records indicate that many of the people with knowledge of Laukamp's personal life are scientists, engineers and skilled tradespeople. The people who had the scientific knowledge needed to create a forgery that could withstand testing. Live Science contacted as many of these people as possible, but the name of the anonymous owner has not yet been revealed.