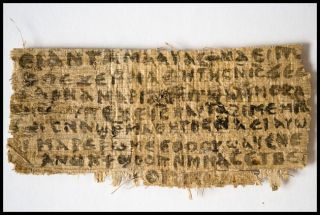 A scrap of papyrus from the early Christian era that refers to Jesus having a wife has met with extreme skepticism since its unveiling 11 days ago. Many scholars have declared the so-called "Gospel of Jesus' Wife" a modern forgery — one that probably postdates Dan Brown's 2003 novel, "The Da Vinci Code." Others say that conclusion is too hasty.

What are the experts' arguments for and against its authenticity? And will the world ever know for sure whether this dogma-defying artifact is real?

The torn, business card-size fragment found instant fame when Harvard historian Karen King announced its discovery last Tuesday (Sept. 18), because it bears the startling line: "Jesus said to them, 'My wife …'" The manuscript is written in Coptic, the language of early Christians living in Egypt. Although the beginning and end of each line of the manuscript are missing, it could be interpreted as a record of a conversation between Jesus and his disciples, in which the disciples tell Jesus: "Mary [Magdalene] is not worthy of it," and Jesus responds that his wife — presumably Mary — "will be able to be his disciple."

King has tentatively dated the artifact to the fourth century, and thinks it may be a copy of a gospel (an account of Jesus' life) written in Greece in the second century, when there was controversy among Christians over the discipleship of Mary Magdalene. If authentic, the gospel suggests some early Christians believed Jesus and Mary were married. [Translation of Papyrus]

However, scholars have identified several peculiarities that have led many to believe the manuscript is a forgery. They say the text was written sometime in the last 50 years, and probably the last decade, upon a blank piece of ancient papyrus that the forger could easily have picked up on the antiquities market.

First, the writing is sloppy. Compared with authentic Coptic papyri, in which letters are written with varying thickness and subtle curves and details, the letters in the Gospel of Jesus' Wife are formed by rigid, straight strokes of equal thickness. In a YouTube video posted Friday (Sept. 28), Christian Askeland, a Coptic scholar based in Germany, explained that the letters look unnatural, as if written by someone with a very limited knowledge of the language.

If a forgery, it's clearly not the work of a professional, but Askeland doesn't think it was written by a fourth-century amateur, either. "He's obviously not writing in a really formal kind of way, but he's not doing the kind of idiosyncrasies you see in a typical informal hand or in a semi-literary text or something like that," he said.

Second, several experts have pointed out that the scribe does not seem to have used either of the writing instruments common to the time period: a stylus (Roman metal pen) or a calamus (Egyptian reed pen). The blotchiness of the letters and what look like brushstrokes in one place suggest the author instead used a paintbrush — an unorthodox writing tool in ancient Egypt. (Other experts have countered that the pen may simply have been dull.)

Third, the textual content raises questions. Despite much of the manuscript being cut off, its meaning is "too easy" to decipher, Askeland said. "If you look at which parts of the manuscript have the subject and the verb staring right at us, it's most of the manuscript." The center-alignment of all the key phrases seems atypical.

Askeland concludes, "It is very probable that it's a fake." [Did Leonard da Vinci Copy His Famous 'Vitruvian Man'?]

Also regarding the textual content of the piece, the New Testament historian Francis Watson of the University of Durham points out that all the snippets in the text except for "my wife" also appear in the Gospel of Thomas, an authentic Coptic gospel that was discovered in Egypt in 1945; the snippets from Thomas have simply been rearranged to create a new meaning. Watson considers it unlikely that an ancient scribe would have borrowed each of his phrases from a contemporary work. "It's much easier to see how a modern compiler with limited ability in Coptic might gratefully avail him- or herself of material extracted from existing Coptic texts," Watson wrote in an article published on his website.

A translation of the Gospel of Thomas was published in 1956. Watson thinks the Gospel of Jesus' Wife must have been forged sometime since then. "I have a suspicion it's post-2003 as well. That was the year the "Da Vinci Code" was published, and this could have provided the inspiration," he wrote. (In Dan Brown's novel, Jesus is married to Mary Magdalene.) [Who Was Jesus, the Man?]

Not everyone is ready to trash the scrap of papyrus. "While these are interesting arguments, I certainly don't think they're conclusive," Paul Dilley, a scholar of early Christianity at the University of Iowa working on non-canonical literature and Coptic, told Life's Little Mysteries.

For one thing, the scribe who wrote the Gospel of Jesus' Wife could simply have had bad penmanship. To the argument that the phrases in the gospel are cut-and-pasted from the Gospel of Thomas, Michael Peppard, assistant professor of theology at Fordham University, rejoins that most of the phrases were in common usage, and so their appearance in both texts is just a small but unsurprising coincidence.

Furthermore, "there is one word that does not match its use in the Gospel of Thomas or its first entry in Coptic dictionaries, and it's the crucial word under discussion: 'wife' (hime)," Peppard writes on his blog. "The most common version of this word is s-hime (with an aspirated 'h')," he writes.

It would be odd for a modern forger to choose a less common version of the "headline-grabbing" word.

And Peppard said it would also be odd for a modern forger to manage to fade and fray the papyrus fragment authentically enough to convince Roger Bagnall, director of the Institute for the Study of the Ancient World at New York University and one of the world's most respected papyrologists. Bagnall says the absorption of the ink by the papyrus, especially in faded and damaged areas, stands up to scrutiny. "It's hard to construct a scenario that is at all plausible in which somebody fakes something like this," he told the New York Times. "The world is not really crawling with crooked papyrologists."

With compelling arguments on both sides, the marital status of Jesus — or, at least, early opinions on the subject — may come down to chemistry. The chemical composition of the manuscript's ink will be tested at Harvard in mid-October.

"I think that the results of an ink test would be conclusive," Dilley wrote in an email. "A carbon dating of the papyrus would not be conclusive, because if it is a modern forgery, the forger could have obtained an ancient papyrus fragment relatively easily, and then written over it. It would be far more difficult to reproduce ancient ink accurately."

An authentic Coptic manuscript would most likely be written in carbon-gum ink, made from carbon soot and gum arabic (made from the sap of acacia trees). But even if the tests reveal the right kind of ink of the right age, naysayers have argued that a clever forger could have bought an ancient scrap of papyrus, burned part of it to produce carbon soot, used the soot to make ink, then used the ink to write the phony gospel on the remaining fragment.