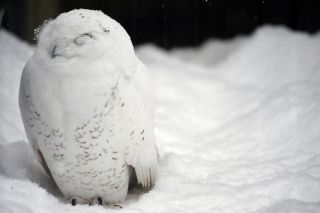 As birds of the treeless tundra and other open spaces, snowy owls cannot rely on vegetative cover to remain hidden when they want to get some rest. Their ivory-white plumage thus serves them well and allows them to rest easy knowing they are nearly invisible.
(Image: © Julie Larsen Maher © WCS)

No one is neutral about owls.

Historically, some cultures have vilified these feathered predators, and some have revered them, making these birds a physical manifestation of what people fear or admire. Silent and hidden by shadow, owls are seen as bad omens or harbingers of death across parts of Africa, the Middle East and among some Native American tribes. But they are also figures of wisdom among most European cultures. The birds are a holy symbol for Hindus, gods for the Ainu peoples of Japan and sacred creatures for the Hopi tribe of the American Southwest.

Habitat loss and superstition-driven maltreatment have caused some owl numbers around the world to dwindle, but the birds have undergone a renaissance in popular culture — a resurgence largely attributable to a wizard named Harry. And awareness can lead to a softening of stigmas. Owls are sought-after prizes for bird-watchers and wildlife photographers alike. And an innovative association is helping some owls — particularly barn owls — to prosper.

Growing ranks of farmers view their agricultural fields as a nexus of symbiotic coexistence, a place where owls and humans can live and work together. Globally, from Malaysia to Cyprus to the United States, farmers are incorporating barn owls into comprehensive, nontoxic rodent-control programs. In these programs, called "integrated pest management," farmers install owl nest boxes near or among their crops and let the owls do the rest. A family of barn owls can remove anywhere from 3,000 to 9,000 rodents in a year, an attractive solution for farmers worried about rodent-induced crop damage and disease.

Here, we celebrate some of the adaptations that make owls what they are, the features that cause people to love or fear these evocative birds.

The primary flight feathers of many owl species, like this northern white-faced owl, have "serrated" edges that dissipate the air when an owl flaps its wings. This adaptation reduces turbulence and makes a flying owl very difficult to hear. (Credit: Julie Larsen Maher © WCS.)

The facial discs of many owl species, like these spotted owls, channel sound directly to the owl's earholes, working like a built-in microphone parabola. This hyperacute hearing means some owls can hunt in complete darkness, based on sound alone. (Credit: © Jonathan C. Slaght, WCS Russia.)

As birds of the treeless tundra and other open spaces, snowy owls cannot rely on vegetative cover to remain hidden when they want to get some rest. Their ivory-white plumage thus serves them well and allows them to rest easy knowing they are nearly invisible. (Credit: Julie Larsen Maher © WCS.)

Burrowing owls, found in the southern United States and much of Central and South America, often occupy holes excavated by prairie dogs or ground squirrels. When threatened by predators, the owls hide in their burrows and emit rattlesnakelike noises, an effective strategy to deter further pursuit. (Credit: Julie Larsen Maher © WCS.)

Eurasian eagle owls, among the world's largest owls and remarkably tenacious predators, hunt a wide range of prey. Records include smaller animals such as rodents and rabbits, but also birds as large as cormorants and eagles. These owls may even hunt young deer. (Credit: Julie Larsen Maher © WCS.)

Unique among its cousins

Blakiston's fish owls, found in northeast Asia, have adapted to hunt aquatic prey such as salmon. As their primary prey lives underwater, these owls do not need (and do not have) the defined facial discs or silent flight that are common to most other owl species. (Credit: © Jonathan C. Slaght, WCS Russia.)

The diminutive boreal (or Tengmalm's) owl is scattered at low densities across the coniferous forest belt from Alaska to Ontario, Canada, and Norway to Kamchatka, Russia. Given its secretive nature and the difficult-to-access habitat in which it lives, this is one of the least-studied owls of the Northern Hemisphere. (Credit: © Jonathan C. Slaght, WCS Russia.)

Northern saw-whet owls are small and secretive. These owls are common, but rarely seen, since they hunt for mice and other small mammals at night. During the day, saw-whet owls roost in the dense branches of coniferous trees. The birds' brown-and-white-dotted feathers help to camouflage them in their resting places. (Credit: Julie Larsen Maher © WCS.)

Read more in Jonathan Slaght's blog and the WCS Wild View blog posts A Reluctant Participant, Night Owl, Fishing for a Living, and Looking for the Last of the Wild.