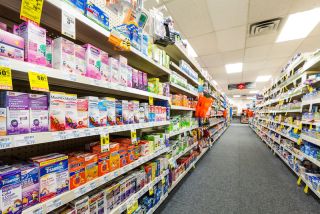 Doctors are excited to see naloxone — an antidote that can save a person who has overdosed on opioids — now hitting pharmacy shelves in a handful of states across the country. The drug, which can be given as a nasal spray, can prevent people from dying from overdoses of heroin and other drugs, and has almost no chance of hurting someone.

People who use or abuse opioids, and people who live with someone who does, should have naloxone in their home just like people with allergies should have an EpiPen in the house, and just as any home should have a fire extinguisher, she added.

Naloxone is a 'knock-out'

Opiates, such as oxycodone and heroin, work by binding to opioid receptors in the brain.

Naloxone reverses the effects of opioids by knocking the drugs off their receptors in the brainstem, she said.

Naloxone usually works within the first 1 to 2 minutes of administering it, Hawk said. However, almost all take-home kits include two doses — people are instructed to administer a second dose 3 to 5 minutes after the first if the patient is not responsive, she said.

It's also essential that someone call 911, she added.

Just because naloxone binds to the same receptors as opioid drugs doesn't mean it has the same high-inducing effect. Naloxone doesn’t get users high, and has no potential for abuse, Hawk said.

And if someone with no opioids in his or her system takes naloxone, the drug has "no effect whatsoever," Hawk said.

Some have raised concerns that the availability of naloxone will make it easier for people to abuse drugs, but several research studies have shown that opioid abuse does not increase when access to naloxone increases, Hawk said.

"The experience of an overdose is a horrible [one], and [naloxone] works by putting people into withdrawal, which people go to great lengths to avoid," Hawk said.

However, she stressed that patients given naloxone need to be informed about how to use it properly.

Pharmacists are a great resource. They are absolutely educated on how to instruct people to use naloxone, Hawk said.

In addition to getting information on how to use it, patients should also know the importance of seeking medical treatment after an overdose, as well as how to reduce their risk of future overdoses, she said.

State by state, as people grapple with the opioid overdose crisis, more are beginning to wonder why the drug isn't more widely available, she said.

In fact, many states have what are known as "collaborative practice agreements," which allow pharmacists to provide patients with specific medication-management schemes, such as diabetes care or travel medications. The agreements could also be adapted to allow pharmacists to provide patients with naloxone, without the need for those patients to see a doctor for the prescription, Green said.

The best-case scenario? Naloxone would be available over the counter in every state at a low cost, she said.