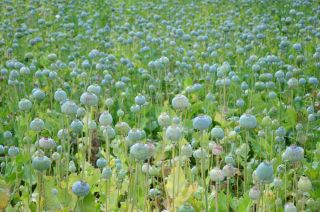 In January, Vermont Gov. Peter Shumlin devoted his entire State of the State message to heroin, calling it "a crisis bubbling just beneath the surface." The number of babies born with opiate addiction at Vermont hospitals has increased tenfold since 2002, according to The Boston Globe. Equally grim statistics have come from Maine, New Hampshire, Massachusetts and elsewhere in the region.

The death of Oscar-winning actor Philip Seymour Hoffman from a heroin overdose in February cast a harsh spotlight on heroin abuse in the United States and elsewhere, though few people actually know what heroin is or how it works. [Aspirin to Zoloft: The Scoop on 5 Medicines]

Heroin is an opiate drug that's derived from morphine, which is itself obtained from the opium poppy plant (Papaver somniferum). Techniques vary, but most growers use either the seedpods or the straw chaff of the flowering plant to extract a light-brown powder containing concentrated morphine.

Opium poppies and their derivatives — including the painkillers codeine and laudanum, the cough-suppressant noscapine, as well as morphine — have been renowned throughout human history.

Neolithic burial sites in Spain show evidence of poppy use. The first recorded reference to opium comes from 3,400 B.C., when the opium poppy was grown in Mesopotamia, according to the Drug Enforcement Agency (DEA). The ancient Sumerians referred to the poppy as hul gil (the "joy plant"), and ancient Egyptian, Greek, Minoan and Sanskrit texts document the use of poppy-derived medicines.

Morphine was first extracted from opium resin in 1803; it quickly gained popularity among doctors as a painkiller, and was used widely in the U.S. Civil War and other conflicts.

Hoffman's company, which eventually grew to become the pharmaceutical giant Bayer, marketed diacetylmorphine as "Heroin" based on its supposed heroic qualities. The company promoted its new product as a safer painkiller than morphine, until it was discovered that heroin rapidly metabolizes into morphine in the body.

The United States and most other countries eventually banned heroin; it's now listed under the U.S. Controlled Substances Act as a Schedule I narcotic, which means it's considered to have no medical benefit and a high potential for abuse.

Heroin is available in several different forms — the most common are a powder that ranges in color from brown to white, and a sticky, dense resin known as "black tar." Known by street names including "horse" and "smack," heroin is often cut with substances such as powdered milk, sugar, starch, quinine or other impurities, according to the U.S. Department of Justice.

In powder form, heroin can be inhaled, "snorted" into the nostrils or smoked; users can also insert it into the anus or vagina. Many, however, prefer to inject a liquid form of the drug (after it's combined with water and an acid such as lemon juice); this method results in a faster, more-intense high.

Like other opioid-based painkillers, heroin binds to opioid receptors in the brain and spinal cord. This results an intense "rush" of euphoria — especially when the drug is injected — and freedom from pain and anxiety, followed by a warming sensation and the drowsy sense of well-being typical of opioid painkillers. This high can last for several hours, depending on the strength of the dose.

Side effects of heroin

In addition to impaired mental functioning from the high it causes, heroin often leads to physical dependence among users. The drug also causes constricted pupils, nausea, constipation, muscle spasms, and a slowed pulse and rate of breathing.

In high doses, heroin can result in convulsions and a dangerously low pulse. The drug's depressive effect on respiration can cause slow, shallow breathing that may, in the case of an overdose, stop altogether — the cessation of breathing is a leading cause of death among heroin users.

"Heroin makes someone calm and a little bit sleepy, but if you take too much, then you can fall asleep, and when you are asleep your respiratory drive shuts down," Dr. Karen Drexler, associate professor in Emory University's psychiatry and behavioral sciences department, told CNN.

"Usually, when you are sleeping, your body naturally remembers to breathe. In the case of a heroin overdose, you fall asleep and essentially your body forgets," Drexler said.

Injection of heroin — particularly with shared needles — has also been associated with the spread of blood-borne pathogens, including hepatitis and HIV/AIDS.

Additionally, heroin can be cut with any number of toxic impurities, including fentanyl, another opioid painkiller that can greatly increase the potency of heroin. A growing number of media reports indicate that much of the heroin now available in New England and the East Coast is cut with fentanyl, which may have contributed to Philip Seymour Hoffman's overdose.

"Literally, every time someone injects heroin, they're taking a risk of an overdose," Jack Stein, director of the Office of Science Policy and Communications at the National Institute on Drug Abuse, told National Geographic.

Treatment for heroin use

Heroin's rising popularity isn't limited to the East Coast: An estimated 607,000 people used heroin each year from 2009 to 2011, compared to 374,000 people each year from 2002 to 2005, according to the U.S. Substance Abuse and Mental Health Services Administration (SAMSHA).

Treatment for heroin addiction often includes behavioral counseling and medical therapies, including the regulated use of methadone or buprenorphine, both synthetic opioids that have varying degrees of success at treating opioid addictions.

Withdrawal from heroin use can be a difficult and lengthy process — symptoms can include extreme pain, insomnia, nausea, vomiting and diarrhea.

Doctors administer naloxone in the event of a heroin overdose; this medication counteracts the respiratory depression that heroin can cause. A growing number of law-enforcement personnel and paramedics now carry a supply of naloxone at all times.