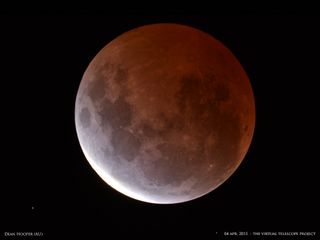 If you pick just one night this year to go out and look up, make it tonight (Sept. 27). If skies are clear, expect a delightful treat as a total eclipse of the moon occurs in rare circumstances that will render the moon slightly bigger than normal, a so-called "supermoon."

Here's how it will happen: To start with, there will be a full moon, which occurs every 29.5 days when the sun, Earth and moon are pretty well lined up, with Earth in the middle. Tonight, the moon is in just the right spot on its orbit — which takes it above and below the plane of Earth's orbit around the sun — so the alignment will be perfect, and Earth will cast its shadow across the face of the moon. In fact, full moons are never totally full, because when they would be, the moon is in total eclipse.

As a bonus, the moon is at its closest point to Earth right now, so it will appear slightly larger than most full moons. "Because the orbit of the moon is not a perfect circle, the moon is sometimes closer to the Earth than at other times during its orbit," explains Noah Petro, deputy project scientist for the Lunar Reconnaissance Orbiter at NASA's Goddard Space Flight Center. The effect is not dramatic, "but it does look larger," Petro said. [See Photos of the Supermoon Lunar Eclipse]

The combination of a total lunar eclipse with a supermoon last occurred in 1982 and won't happen again until 2033.

When, where and how to watch

The eclipse will be visible across more than half the planet. North America is perfectly situated for an evening and late-night skywatching treat. People across much of Europe, Africa and western Asia will have good seats, too.

Watching a lunar eclipse requires no special equipment or knowledge. Just go out and look up. If skies are clear, the moon is of course impossible to miss. If you have a telescope, however, you can explore the moon's surface in detail while the eclipse plays out over a few hours. The dividing line between light and shadow on the moon — which will be moving all evening leading up to the total phase — is the perfect place to see lunar craters in stark contrast. [Rare 'Supermoon' Lunar Eclipse Tonight: Skywatching Tips]

To enjoy the full effect of the event, you'll want to take your first look as soon as the moon begins to rise in your location — it will come up at sunset, no matter where you are. Then stay out or return periodically to see the Earth's shadow gradually gobble up the moon. In Western states, the eclipse begins right around moonrise. Back East, you can have dinner first. In Europe, you may need an alarm.

Times will be a bit different depending on where in a time zone you are. On Live Science's site Space.com, you can find full coverage of the supermoon eclipse, including details on timing, locations, more viewing tips and photos of the event during and afterward.

(For folks outside North America: The corresponding Universal Time when the moon enters the umbra is 1:07 a.m. Monday morning (Sept. 28.)

Once the moon enters the umbra, our favorite little satellite will appear to be swallowed gradually, as Earth's shadow, in the shape of a scallop, crosses the lunar surface. [10 Amazing Facts About the Moon]

At the height of the eclipse — during what's called "totality" — the moon won't disappear. Rather, sunlight will bend through Earth's atmosphere, with only the red light making it to the moon and reflecting back to us. (The shorter-wavelength blue light gets absorbed by Earth's atmosphere, which is why on any given evening, a sunset can be red.)

In effect, all the world's sunrises and sunsets are casting their glow on the moon.

"Picture it from the point of view of an astronaut standing on the moon," said Alan MacRobert of Sky & Telescope magazine. "They would see the dark Earth in the sky thinly ringed with brilliant orange from the sun hidden behind it. The ring is bright enough to illuminate the lunar landscape an eerie red."

Some refer to this as a blood moon. If you did not know where the moon was during this time, you can find it, but it might take a moment, as the moon will be very dim against the black heavens.

If you're able to go out when the full moon rises, you may notice the moon seeming to loom much larger than it will later in the night, when it lifts off the horizon. This is called the moon illusion (and has nothing to do with the supermoon effect, which renders the moon bigger than normal all night, not just on the horizon).

To prove the illusion, hold a pencil eraser, a dime or other small object next to the moon on your outstretched arm at moonrise. Compare the size of the two objects. Do the same thing when the moon is higher in the sky and seems to be smaller. You'll see that the sizes of the object in your hand and the moon don't change over time. If you don't believe your eyes, you can snap a photo of both moments and compare them.

Scientists don't know for sure what's going on, but the human brain seems to interpret objects on the horizon as being larger than objects overhead.  It may be because we're used to seeing clouds overhead that are just a few miles away, while clouds on the horizon can be tens of miles distant and yet, sometimes, a larger faraway cloud might appear to be the same size as a smaller one straight above.

Whatever, the main event is the total lunar eclipse. If you've never seen one, don't miss it. And expect to be wowed.