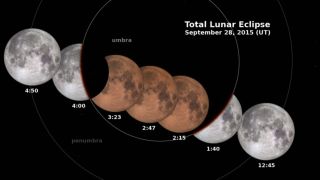 The supermoon lunar eclipse will be visible in the Americas, Europe, Africa, western Asia and the eastern Pacific Ocean on the night of Sunday, Sept. 27, 2015.
(Image: © NASA)

A rare supermoon lunar eclipse will grace the night sky on Sunday (Sept. 27), and if you live in the Western Hemisphere, you could have spectacular views of this celestial treat.

During this weekend's supercharged eclipse, not only will the moon appear up to 14 percent larger in the night sky, but it will also look red in color. This so-called "Blood Moon" effect is caused by light refracting through Earth's atmosphere from sunsets and sunrises, according to NASA. The last time this type of lunar eclipse occurred was in 1982, and it won't happen again until 2033.

People in North America, South America, Europe, Africa, and parts of western Asia and the eastern Pacific should be able to get a clear view of the sky show. The moon will pass through the dark part of Earth's shadow beginning at 9:07 p.m. EDT on Sunday (0107 GMT), and the total eclipse will start at 10:11 p.m. EDT, NASA officials said in a statement. The full total eclipse show will last 1 hour and 12 minutes. [Supermoon Lunar Eclipse of 2015: Viewing Maps for the Blood Moon]

"I've been telling people to go to a field near their house that doesn't have a ton of tall trees," Petro told Live Science. He added that while being in a darker environment, away from bright city lights, will make for a much clearer look at the moon, you should be able to see the eclipse in urban settings (weather permitting, of course) as long as you have an unobstructed view of the sky.

"You want to have a good view of the sky, but you don't need to see the horizon," Petro said. If, however, you don't live near a large field, Petro recommended trying to see the eclipse from the roof of a building, in a park without too many tall trees or even from a parking lot.

Be advised, though: The eclipse will take some time to ramp up, said Arty Kunhardt, a member of the Amateur Astronomers Association of New York.

"At first, all you're going to see is the penumbra, a very light shadow," Kunhardt told Live Science. It's not until later that "the really dark part of the Earth's shadow," called the umbra, will be visible. This is what you'll see during the total eclipse.

Kunhardt also said to keep the weather forecast in mind. "Right now [in New York City], the weather looks like [it will be] partly cloudy," he said. This type of weather shouldn't prevent anyone from seeing the eclipse. It's only at times when the  sky is completely overcast that visibility becomes impossible.

Scientists will be watching Sunday's supermoon total eclipse closely, as well. Petro and his team will be using the LRO spacecraft to take special measurements of the lunar surface during the eclipse. The probe's radiometer is expected to send back information about the moon's surface and subsurface temperatures.

"Normally, [LRO is] just mapping temperatures day and night [as the moon's surface] heats and cools, but when you go to an eclipse, [the moon's surface] goes from being in the oven of the sun [to] then going instantly cool," Petro said.

This quick change gives off a very different thermal signature than what scientists are usually able to record, he said, and getting measurements of how quickly different parts of the moon's surface are cooling off tells researchers more about the uppermost part of the moon's surface. These observations can help scientists glean information about what's happening on the lunar surface and how it has been changing over time.

"The LRO is telling us that the moon is a really dynamic place," Petro said, and getting measurements during special events like this gives scientists a better picture of what sorts of changes are actually taking place and when.

But even if you just crane your neck to see the night sky, you should still be able to get a clear look at the rare eclipse, Kunhardt said. "You really don't need a telescope or anything like that," he said. "If you want a closer view, you can bring binoculars, but you can see plenty with the naked eye."