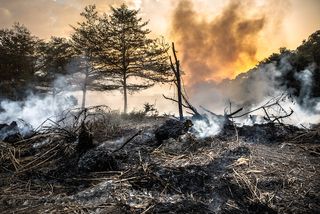 The crackling, raging wildfires that are roasting the Western states could have some odd effects beyond destroying homes and wiping out towering trees.

From early visits from coyotes looking for an easy, and rodent-y, post-burn snack, to a shrubby buffet that flourishes for elk and bison, here are six ways forest fires affect trees and animals, and the science behind them.

This year's fires are vast, affecting such states as California, Idaho, Oregon and Washington. California is bearing the brunt of the destruction, with six fires covering 399,022 acres (1,614 square kilometers) — roughly the size of 18 Manhattans, according to the National Interagency Fire Center. [Raging Western Wildfires in Photos]

Most, but not all, wild animals escape forest fires ahead of time, said Timothy Ingalsbee, co-director of the Association for Fire Ecology, a nonprofit group in Eugene, Oregon, that educates people about the use of fire in land management.

"Large game, in particular, are very adept at moving [away from the fire]," Ingalsbee said. "When I was a firefighter, [I remember] deer just casually grazing as they kind of moved along, just ahead of the fire."

Many birds fly away. But others, such as spotted owls, will roost and watch the fire until it smokes them out of the area, he said.

Unless a fire is extremely hot and intense, the heat won't penetrate too deeply into the soil. So, many rodents protect themselves by burrowing into the ground or by hiding in damp logs, which can act as miniature fire shelters.

As the fire cools off, these rodents emerge, often to the hungry jaws (or claws) of predators looking for an easy snack. (Once the fire has burned off the shrub cover, rodents have fewer places to hide, making them easy targets for predators, such as coyotes or raptors, Ingalsbee said.)

The black-backed woodpecker also looks for charred areas. The blackened trees provide camouflage for the bird while it hunts for insects living in dead trees.

The initial wake of a forest fire can leave an ashen landscape and charred trees.

Herbivores may find it difficult to forage at first, but within a year or two, shrubs often start growing, creating a green buffet for animals such as elk and bison.

"The fertility and fecundity of the post-fire environment is rich," Ingalsbee told Live Science. "The fire actually produces many ecological benefits, like raising soil fertility and allowing certain grasses and shrubs their time in the sun to grow."

A number of pine trees produce cones that are covered with a waxy resin. These "serotinous" cones can't release seeds until a fire burns away the resin, allowing the pine cones to open and spread their seeds.

Even if the fire kills the tree, the pine cones (and their seeds) can survive to create the next generation, Ingalsbee said. These trees include jack pines, lodgepole pines and knobcone pines, he said. [Images: Southwestern Wildfires Seen from Space]

The giant sequoia (Sequoiadendron giganteum) also has serotinous cones. Fire not only opens its cones, but also clears space, and makes nutrient-rich soil, for its progeny.

However, giant sequoias are in danger from this year's fires, Ingalsbee said. Without fires in recent years, other trees, especially firs, have encroached on giant sequoia habitat. These firs compete for space and water. What's more, as understory trees, firs serve as natural ladders for fire, allowing flames to climb them and reach the high branches of the giant sequoia, Ingalsbee said.

Normally, sequoia bark exfoliates as it burns, meaning the tree releases heat instead of absorbing it. But if the fire is too intense (especially if there are heaps of pine needles underneath to fuel the fire) the roots of the sequoia can burn, killing the tree, Ingalsbee said.

So far, California's giant sequoia groves have escaped the flames. But one large wildfire is about an hour's drive away from a grove where General Grant, one of the tallest giant sequoias, lives, according to the Associated Press.

If a fire is particularly intense, the burned plants produce a waxy substance that gets into the soil and coats soil particles, making them hydrophobic — they repel water. So water can't seep through that layer of soil, Ingalsbee said.

Hydrophobic soil is a temporary problem but it can lead to erosion, because the plants (and their roots) that would otherwise latch onto the soil can no longer grow there.  If the soil is erosive, dirt and other organic matter can end up in streams, destroying fish habitat, he said.

"This is a fear in California," Ingalsbee said. "We're going to have a super El Niño wash these barren hillsides away."

Loggers tend to take large, mature trees that are more resistant to fire, and leave behind the smaller, understory trees that are good fuel for fire, Ingalsbee said.

Sometimes, new trees are planted in place of the logged ones, and these can take years to mature.

"People have said, 'Oh, we must log our forest and save it from wildfire.' But the most flammable forests out there are these densely stocked tree plantations," Ingalsbee said. "Young trees, the needle mass is the most flammable portion, and it's right there, thick and close to the ground. It doesn’t take a very hot fire to just completely wipe [them] out."

But fires can actually benefit forests. A burned tree can serve as a nursery for other plants and animals, he said.

"The notion is that fires leave a moonscape behind," Ingalsbee said. "But pyrodiversity enhances biodiversity."