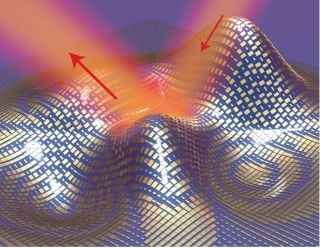 An illustration of the ultrathin "invisibility" cloak. Light reflects off the cloak (shown by the red arrows) as if it were reflecting off a flat mirror.
(Image: © Courtesy of Xiang Zhang group, Berkeley Lab/UC Berkeley)

In the movie "Predator," an alien uses a cloaking device to hide in plain sight, but the effect is far from perfect: The alien's attempt to conceal itself is thwarted by distortions of light bending around it. Now, researchers have built an ultrathin "invisibility cloak" that gets around this problem, by turning objects into perfect, flat mirrors.

Invisibility cloaks are designed to bend light around an object, but materials that do this are typically hard to shape and only work from narrow angles — if you walk around the cloaked object, for instance, it's visible. But a new cloak avoids that problem, and is thin and flexible enough to be wrapped around an object of any shape, the researchers said. It can also be "tuned" to match whatever background is behind it — or can even create illusions of what's there, they added.

Led by Xiang Zhang, director of materials science at Lawrence Berkeley National Laboratory, the group constructed a thin film consisting of a 50-nanometer-thick layer of magnesium fluoride topped by a varying pattern of tiny, brick-shaped gold antennas, each 30 nanometers thick. (For comparison, an average strand of human hair is about 100,000 nanometers wide.) The "bricks" were built in six different sizes, ranging from about 30 to 220 nanometers long and 90 to 175 nanometers wide. [Now You See It: 6 Tales of Invisibility in Pop Culture]

The scientists then wrapped up a tiny, irregularly shaped object measuring about 36 microns across, or a bit more than one-thousandth of an inch. Shining a light, with a wavelength of 730 nanometers, or near-infrared, they found that it reflected back almost perfectly. The light scattering from the cloak still bounced off the object, but without revealing where the object was — as though there were just a flat mirror in its place, the researchers said.

The tiny object appeared to be invisible because the gold antennas controlled the scattering of the light that reflects off of it, the scientists explained. Ordinarily, light reflecting off an object (even a glass mirror) will scatter at least a little, especially if the shape is irregular. The waves of light will also sometimes create interference patterns. As a result, reflected light appears as colors (when some is absorbed), or reflection, depending on the object.

The new invisibility cloak changes that: The gold bricks reflect the light in such a way that the light's phase and frequency are both preserved. (Phase is an angle measurement that tells you how far along a light wave you are; two waves 180 degrees out of phase cancel out.) The ultrathin cloak creates an effect that makes it seem like the light were hitting a perfect mirror and the cloak and object weren't even there. Even the edges are invisible with the new device, the researchers said.

With the proper tuning of the gold bricks, it's not hard to make the reflected light look like anything you want — either the background of the object (a floor, for example) or something else entirely, Zhang told Live Science. If the cloak were big enough, theoretically, you could drape it over anything. "You could cover a tank with it and make it look like a bicycle," he added.

Although the cloak Zhang and his colleagues made is tuned to hide objects from light reflected at a wavelength of 730 nanometers, there's no reason it can't work with multiple wavelengths, Zhang said. [Science Fact or Fiction? The Plausibility of 10 Sci-Fi Concepts]

The reflection trick also works from any angle, and the cloak doesn't have to be a certain shape — it can be wrapped around anything, and the effect still works. It's also thin and light, according to the researchers.

But there is one disadvantage: If Harry Potter were wearing this cloak, he'd have to stay still for it to work, since the tuning has to be matched to the background.

Andrea Alù, an associate professor of electrical engineering at the University of Texas at Austin, has done extensive research on cloaking systems. He is skeptical that scientists can create the kind of illusion Zhang describes.

"They had a small object, a little bump," Alù told Live Science. "With a larger object, I can't take advantage of that … when I illuminate it, a portion is not illuminated; it's in shadow." As such, the illusion of the perfect reflector would be broken, he said.

Even so, the new findings show you can manipulate how light reflects using nanometer-scale structures on a thin surface. "The beauty of the paper is that you can control the reflection surface at the sub-wavelength scale," Alù said.

Zhang said the cloaking technology's reflectivity offers another application: displays. Right now, any big projection (e.g., a movie in a theater) has to use a relatively flat surface. But if the phase and frequency of the light reflected from it could be finely controlled, that problem could go away. A projection surface could be any shape, and the resulting picture would not be distorted.

Zhang added that this kind of material has been fabricated before, and that a next step would be to make a lot of it at industrial scales, tuning the antennas to different wavelengths of light.

The new study was published online today (Sept. 17) in the journal Science.