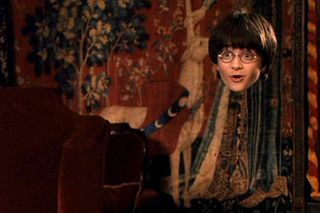 If Harry Potter's invisibility cloak was created like those in labs today, the young wizard may have been visible at least if one looked at visibility over all wavelengths.
(Image: © Warner Bros.)

Invisibility cloaks, once thought of only as "Star Trek" science fiction, or the province of certain boy wizards, work by smoothly guiding light waves around objects so the waves ripple along their original trajectories as if nothing were there to block them. Cloaking devices that work against other kinds of waves are possible as well, such as the acoustic waves used in sonar.

As exciting as the cloaks are, scientists know they possess a number of drawbacks. A major challenge is that the cloaks are usually limited to working against narrow ranges of wavelengths for various types of waves — a cloak deflecting microwave beams would likely not work against visible light.

To see if there was a way around this shortcoming, researchersexplored how invisibility cloaks scatter light waves. Although cloaks may render objects invisible within a certain range of wavelengths,  the scientists' calculations surprisingly revealed that all cloaking techniques available today actually scatter more light than uncloaked objects — essentially rendering objects more visible, not less — if one looked at visibility over all wavelengths. [Science Fact or Fiction: The Plausibility of 10 Sci-Fi Concepts]

For example, making an object invisible to red light may also make it bright blue, boosting its overall visibility. Assuming one looked at all wavelengths of light, one would actually see the cloaked object "more than the uncloaked object it is trying to hide," said study co-author Andrea Alu, an electrical engineer at the University of Texas at Austin. Alu and his colleague, Francesco Monticone, detailed their findings Oct. 21 in the journal Physical Review X.

Invisibility cloaks are generally made of artificial structures known as metamaterials, whose light-scattering properties depend on how these materials are built. Instead of using static, fixed materials to warp light as current invisibility cloaks do, the researchers suggest making future cloaks from active, dynamic components, such as a network of electronic amplifiers connecting an array of square metal patches on a surface. These electronic circuits can theoretically tailor cloaks to remain invisible over broad ranges of wavelengths depending on the incoming light waves.

"The most promising venue is to explore the ultimate limits of active cloaks, and how good of a performance we can achieve," Alu told LiveScience. "Our theoretical results in this venue appear very promising."

Alu and colleagues Pai-Yen Chen and Christos Argyropoulos will detail their findings on active cloaks in a paper accepted for publication in Physical Review Letters.