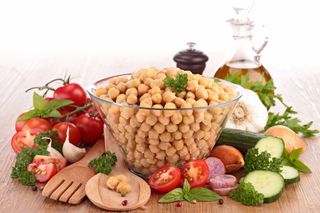 The Mediterranean diet may be able to add "reduces risk of breast cancer" to its long list of health benefits, according to a new study from Spain.

In the study, researchers found that women who were asked to follow a Mediterranean diet that was high in extra-virgin olive oil were 68 percent less likely to develop breast cancer than those who were advised only to reduce the amount of fat in their diets.

In the study, 4,152 post-menopausal women who had never had breast cancer were asked to follow one of three diets: One was a Mediterranean diet rich in extra-virgin olive oil (extra-virgin olive oil accounted for 15 percent of their daily calories), the second was a Mediterranean diet rich in nuts, and the third was a control diet, in which the women were advised to reduce the amount of fat they ate. After about five years, 35 women in the study had developed breast cancer. [6 Foods That May Affect Breast Cancer Risk]

Women in the extra-virgin olive oil group were the least likely to develop breast cancer. The researchers also observed a slight decrease in risk for the women in the nut group, but this was not statistically significant (meaning it could have been due to chance), according to the study published today (Sept. 14) in JAMA Internal Medicine.

The Mediterranean diet contains many components that have been suggested to have anti-tumor effects, Dr. Miguel Martinez-Gonzalez, a professor of preventive medicine at the University of Navarra in Spain and co-author of the study, told Live Science in an email. Extra-virgin olive oil in particular is rich in compounds called polyphenols, which have been shown in lab studies to have anti-cancer effects, he said.

However, the researchers do not know if the lower risk may have been lowered due to the extra-virgin olive oil on its own, or if it was the effect of oil working in combination with the rest of the diet, he said.

The Mediterranean diet — rich in plants, fish and olive oil, and low in meat and dairy products — has been shown to reduce risk of heart disease and cancer, according to the study. And a 2015 study suggested that the diet may help ward off cognitive decline.

Previous studies have also shown a reduced risk of breast cancer in women who eat a Mediterranean diet, Martinez-Gonzalez said.

A strength of the new study is that unlike those previous studies, in which women were asked to report what foods they ate, women in the new study were randomized to a specific diet, which eliminates certain factors that can influence the results, Dr. Mitchell Katz, a deputy editor of JAMA and the author of an editorial about the study, told Live Science.

The study did have limitations, including the small number of cases of breast cancer, and that all of the participants were white, post-menopausal women who were at risk of heart disease, Katz wrote in his editorial.

The next steps would be to do larger studies in places where the Mediterranean diet is not so commonly eaten, he told Live Science.

Still, he encouraged women to try out the diet: "Although no diet is perfect, a Mediterranean diet [rich in] olive oil is likely good for your health," Katz said.

Martinez-Gonzalez agreed. Women should be encouraged to eat more extra-virgin olive oil, salads with fresh vegetables and have fruit for dessert, he said.

Women's consumption of red meat and processed meat, sweet desserts, soda and fast food should be reduced, he said.