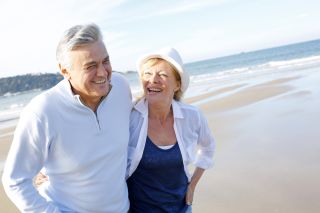 The sunny skies of Florida and Arizona may be a draw for older Americans, but Switzerland is the best place to be if you're 60 and over, according to a new report.

According to the Global AgeWatch Index 2015, which measures the social and economic wellbeing of older people across the globe, Switzerland ranks as the No. 1 country in the world to live for older people.

Norway and Sweden came in second and third, respectively. The U.S. managed to snag a spot in the top 10, coming in at No. 9, according to the report. [See Full Rankings: The Best Countries for Older Adults]

The new report included 96 countries and represented 91 percent of the world's people who are ages 60 and over.

Currently, there are approximately 901 million people worldwide who are 60 and over, according to the report. By the 2050, this number will reach 2.1 billion people, or 21.5 percent of the world's population.

The rankings were based on how well countries scored in four domains: older adults' income security, health status, capability (which included employment and educational status) and enabling environment (which included people's physical safety, civic freedoms and access to public transportation). The scores were calculated from a number of international data sources, including the World Bank, the World Health Organization and the International Labor Organization.

"This Index is vital in representing the lives of older people in countries around the world as it enables us to compare not just their pension income and health but also the age-friendly environments in which they live," Ashar Zaidi, a professor at the Center for Research on Aging at the University of Southampton in England and developer of the Index, said in a statement.

The authors of the report attributed Switzerland's high score in part to the country's policies and programs that promote older adults' health and an enabling environment. Afghanistan, on the other hand, which came in last, has few local or national policies aimed at promoting the wellbeing of older people, the authors write.

In addition to the countries' rankings, the report also revealed additional information about the world's aging populations.

The report also noted that women are at greater risk of poverty than men in old age, due to a combination of gender discrimination and the inequality of old age. Less than half of women ages 55 to 64 around the world work, compared with nearly three-quarters of men, according to the report. And because "women working out of the home usually earn less than men … opportunities to save for later life are limited," the authors wrote in the report.