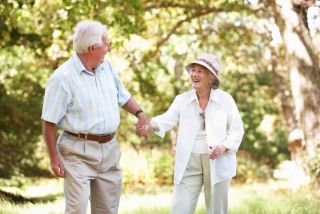 Being healthy can make a person happy, but happiness itself may also lead to better health, according to a new study.

Researchers found that people who enjoy life tend to maintain better physical function than those who don't in daily activities as they age.

The study included more than 3,000 people age 60 and older living in England, and followed them for eight years. The study participants reported how much they enjoyed life by rating statements such as "I enjoy the things that I do," and "I enjoy being in the company of others." [7 Things That Will Make You Happy]

Using in-person interviews, the researchers examined whether participants experienced impairments in their daily activities, such as getting out of bed, getting dressed or bathing. They also gauged participants' walking speed with a gait test.

The results showed that happier people maintained better physical function as they aged, even when the researchers accounted for confounding factors such as age, healthier lifestyle and economic situation.

The unhappiest people in the study were about 80 percent more likely to develop impairments in daily functions, compared with the happiest, according to the study published today (Jan. 20) in the Canadian Medical Association Journal.

The researchers also found that happier people's walking speed declines at a slower rate than those who enjoy life less," said Andrew Steptoe, director of Institute of Epidemiology and Health Care at University College London.

"This is not because the happier people are in better health, or younger, or richer, or have more healthy lifestyles at the outset, since even when we take these factors into account, the relationship persists," Steptoe said.

The results also showed that the study participants with higher economic status and education, and those who were marriedand working, had higher levels of wellbeing.

As expected, poor health was linked to lower levels of happiness: People with chronic illnesses such as heart disease, diabetes, arthritis, stroke and depressionreported lower levels of enjoyment of life.

Researchers had previously shown that older people with greater enjoyment of life are more likely to survive over the next eight years, Steptoe said. The new findings show that "they also keep up better physical function," he said.

The study cannot confirm a cause-and-effect relationship between happiness and health, but adds to the evidence that enjoyment of life is relevant to the future disability and mobility of older people, according to the researchers.

"Efforts to enhance well-being at older ages may have benefits to society and health care systems," the researchers said.