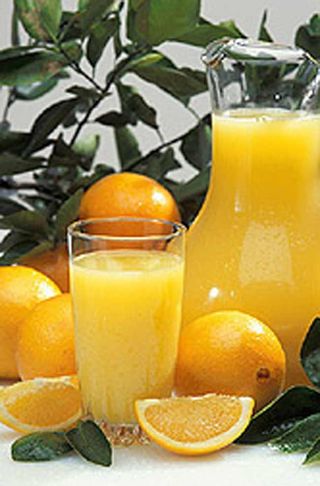 No word yet whether the scientists at Cookie Crisp are planning a rebuttal.

That oatmeal and orange juice can be healthy is no earth-shattering news. What this study claims is that choosing such foods for breakfast is associated with making better food decisions later in the day, which may help folks manage their weight.

Breakfast meals vary greatly by culture, from a generous serving of rice, vegetables, fish and miso soup in Japan to just a cup of coffee in parts of Italy. Recent research reveals that a healthy and filling breakfast is associated with healthy weight, lower cholesterol and better concentration at school or work.

In fact, a study not funded by industry, published in September 2008 in Public Health Nutrition, found that breakfast quality is positively associated with better mental health among adolescents. And a study from 2006 found that consuming complex carbohydrates such as oatmeal is associated with better daily school performance. Also, whole grains such as oatmeal and particularly barley are proven to lower bad cholesterol levels.

The reasons are not entirely clear. But a big breakfast likely reduces the chance of snacking on high-calorie foods. And complex carbohydrates perhaps feed the brain a steady flow of glucose fuel.

The Rippe Lifestyle Institute study examined publicly available data from the National Health and Nutrition Examination Surveys, 1999–2004. The researchers wanted to assess the energy density of various kinds of breakfasts — that is, ratio of calories to grams. Doughnuts have a high energy density; oatmeal has a low energy density, packing fewer calories but more nutrients per gram compared to doughnuts.

Results coming to a package near you

Quaker and Tropicana are thrilled with the results. In coming months, these two PepsiCo-owned divisions will likely boast of these results in their advertisements, as they have done in the past. The press release from the Rippe Lifestyle Institute mentions oatmeal three times and orange juice twice as primary examples of foods with lower energy density"

All the study demonstrated, though, was that people who make a conscious decision to eat a healthy breakfast tend to eat healthy throughout the day. Oatmeal and OJ didn't change their being; nor are these foods superior to other food with lower energy density.

Just because a study is industry-funded doesn't make it wrong. Rippe, in fact, was ahead of the curve in finding (in a PepsiCo-sponsored study) that high-fructose corn syrup is similar to table sugar in its effect on the body. The problem is that industry wants positive results and often crafts a study until its researchers get it "right."

Also, in the hands of non-industry-funded researchers, the emphasis of this study would have been on a wide variety of food with lower energy density, such as barley, wheat porridge, whole grain toast, many commercial cereals, whole fruit (instead of fruit juice), tea... and oh yeah, oatmeal, too.

Not all oatmeal created equally

Actually, one needs to be careful buying into the oatmeal hype. Plain oatmeal is indeed healthy. But packaged products such as Quakers’ Instant Maple & Brown Sugar have twice as many calories as plain oatmeal, largely from the 13 grams of sugar, the same amount of sugar as Cookie Crisp.

Orange juice is high in sugar and calories and low in fiber, exactly what the study itself said we should avoid. (Orange juice isn't mentioned in the study itself, only the press release.) The simple message of "eat more oatmeal and drink more orange juice" could be perverted to adversely affect your health.

Christopher Wanjek is the author of the books "Bad Medicine" and "Food At Work." His Bad Medicine column appears Tuesdays on LiveScience.