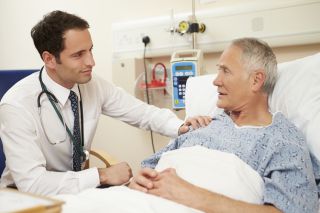 More men with breast cancer are opting to get both breasts removed, even the healthy one, a new study finds.

Between 2004 and 2011, the rates of contralateral prophylactic mastectomies in men nearly doubled, with 5.6 percent of men with breast cancer undergoing the operation in 2011, compared with 3 percent in 2004, according to the study. A contralateral prophylactic mastectomy is an operation to remove a healthy, unaffected breast after a diagnosis of invasive cancer in the other breast.

However, this type of mastectomy isn't always necessary, the researchers cautioned in their study, published today (Sept. 2) in the journal JAMA Surgery.

"[The operation] is only recommended for a small proportion of men," and the rates observed in the new study are higher than this proportion, said Dr. Ahmedin Jemal, vice president of surveillance and health services research at the American Cancer Society and the lead researcher on the study.

In the study, the researchers looked at data from the North American Association of Central Cancer Registries on 6,332 men who had breast cancer in one breast. All of the men underwent surgery between 2004 and 2011.

The researchers found that, over the study period, 1,254 men underwent breast-conserving surgery, 4,800 men underwent a single-breast mastectomy and 278 men underwent contralateral prophylactic mastectomy. On average, the men who opted to remove both breasts were younger than those who didn't, and rates of these mastectomies decreased with the men's age, the researchers said.

The researchers were not surprised by the increase in rates, especially because the pattern has already been observed in women, Jamel said. The rates of such mastectomies in women drastically increased in the past two decades, rising from 2.8 percent of women with cancer in one breast in 1998 to 11 percent in 2011.

For both men and women with BRCA mutations, the procedure is recommended, he said. However, only a small proportion of people who are diagnosed with breast cancer have these mutations, he noted.

Jemal advised that all men diagnosed with breast cancer in one breast talk to their doctors about the benefits and harms of this type of mastectomy in order to make an informed decision. Each decision is individual, but it should be based on evidence, he said.

According to the American Cancer Society, breast cancer is about 100 times less common in men than in women. An estimated 2,350 men in the United States will be diagnosed with breast cancer in 2015. As with women, the most common type of breast cancer is ductal carcinoma, which begins in the milk duct.

Mastectomies are the most common type of surgery for breast cancer in men, according to the Susan G. Komen Foundation. Because men have less breast tissue than women, breast-conserving surgery, or lumpectomy, is rarely used.